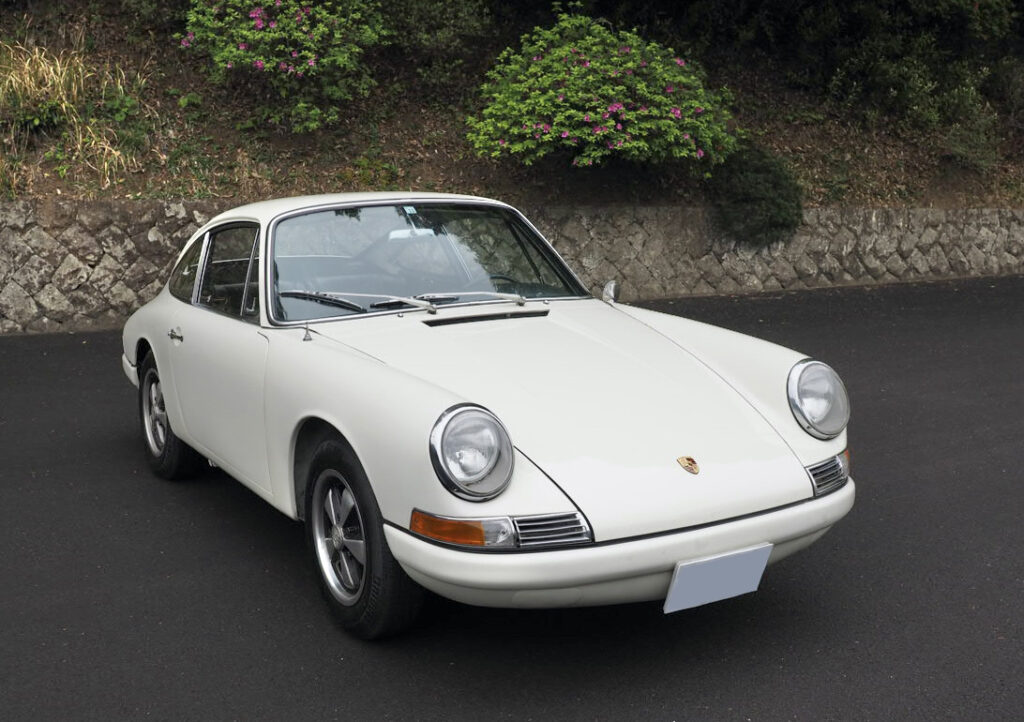 1965… The Porsche 912 was born with a four-cylinder engine derived from the 356 that had been installed in the body of the 911 that had been born the year before. Today, with the image of the subsequent 914 and 924, and the modern Boxster, people tend to think of it as “the entry model to the high-end class…” However, if you read the development story of the 911 from the literature of its home country, you will find that it is definitely not a car that was released at a low price entry level, and it was born in a unique environment. The 912, which was born in a rare environment, changed the history of Porsche after that, as a true classic car with a pedigree, it is well understood that it is “a rare model that the whole world recognized collectors drool over”.

Porsche 912... That changed the history of Porsche. Porsche's history...

A testament to post-war Germany’s recovery, Porsche’s first mass-produced car, the Porsche 356, had a distinctive aerodynamically-conscious, rounded form and was powered by an air-cooled four-cylinder engine that offered both performance and practicality. After World War II, from the first 356 built at a former lumber mill in Austria in 1948 to the last 356 built in Stuttgart in 1965, Porsche built on its sales success in the then victorious US mainland to become an absolutely popular global automaker.

The concept of a four-seater sports car was created by Butzi Porsche, grandson of the founder Ferdinand Porsche, but was eventually converted to a two-seater by order of his father, Ferry Porsche. It is an interesting historical fact that it became the 911 with that unique rear seat shape.

The 911, which was intended to be a four-seat sports car with a larger body style than the 356, was equipped with an air-cooled six-cylinder cam drive engine, which was naturally larger and more powerful than the 356’s air-cooled four-cylinder pushrod engine. In fact, Porsche had been producing four-cylinder, four-cam drive engines since the early 1950s, and they were also used in the special edition 356 Carrera. Initially, Porsche would develop the new 911 not as a successor to the 356, but as a marketing move to expand the high-end niche market that the 356 Carrera occupied. Faced with the fact that the design of the 356 was completely outdated after 17 years on the market and sales were in decline, Porsche was forced to adopt the new 911 design as the successor model to the 356. Naturally, production costs rose dramatically, with the initial 911 costing 22,900 marks, about 40% more than the final 356 SC at 16,450 marks, and more expensive than the 12-cylinder Jaguar E-Type of the time.

In order for the 911 series to be successful, it needed to be priced in the same price range as the 356 in terms of marketing. To achieve this, Porsche began experimenting with the installation of the four-cylinder pushrod engine, which had been technically matured over more than a decade of development in the 356, into the body of the 911. After only a few short months of testing, the combination quickly proved to be a very complete car for the “new Porsche series”. In addition, various cost reductions were made in order to create an attractive prize-thrower. The dashboard of the 912 is painted the same color as the exterior, has no trim, and comes standard with three sets of gauges, while the dashboard of the earlier 911 was painted matte black with wooden trim and five sets of gauges as standard. In addition, while the 911 comes standard with a five-speed transmission, the 912 comes standard with a four-speed transmission, except as an optional extra. With these new initiatives, the final selling price of the 912 was 16,000 marks, almost the same as the final 356. Thus, the Porsche 912 was born.

The Porsche 911 with its air-cooled six-cylinder engine eventually became a hugely successful sports car all over the world, but there were some unintended problems for Porsche at the beginning of its development. The six-cylinder, air-cooled engine of the original 911 had only a small increase in displacement and horsepower compared to the four-cylinder engine of the 356, but it also weighed about 90 kg more. Furthermore, the mass is located beyond the rear axle. As a result, the new 911 was a very tail-happy car, so much so that Porsche actually tried to balance it out by installing weights in the front.

In comparison, the 912 with its aged four-cylinder engine was very well balanced, and as a result, it had excellent handling performance, which is the most important aspect of a sports car, and in actual driving situations, it was faster and more agile than the 911, providing the driver with a great driving experience.

In addition, the 912, equipped with the most advanced and reliable four-cylinder pushrod engine, was the result of more than a decade of development on the 356, and its fuel economy was very good at 13 km/L according to the data of the time. As a result, sales of the 912 outnumbered those of the 911 by a ratio of two to one by 1967.

At the end of 1969, when the price of a new 912 was almost equal to that of the least expensive 911, Porsche decided to merge the 912 into the 911 line. The number of cars produced during that period was about 30,000. The official import to Japan at that time was just 100 units, which is still recorded.

From such historical facts, there is no doubt that it is not a car that was released at the entry level of the low-cost version, the 912 that was born in the exceptional environment of the 911 development process, as a rare model of the classic Porsche enthusiasts of the world drooling as a “classic car with a true pedigree” now, has been handed down to future generations in succession. It has been handed down from generation to generation.

Just by looking at the way the car was standing, I could feel the “aura of being cherished” in front of this 912, “It’s never shiny! The owner smiled and said, “It’s not shiny at all!” He has been actively participating in many classic car events in Japan, saying that “driving is the best maintenance” for his classic cars, and has won many awards with many memories. “He has won many awards with his many memories. “I was really happy… When my car is praised, I feel as if I am being praised! It’s thanks to this car that I’ve been able to build a wonderful Porsche life and a network of people that continues today. I couldn’t help but feel the warm personality of the owner and the true charm of the car!

As the features of the early 912 optionally equipped vehicle…

2. Five-meter meter specification as an option at that time

The following are some of the features of the European specification vehicle.

Next, the features of the European specification car…

1. The front indicator lights are a horizontal white/yellow combination (all North American models are yellow).

2. The rear reflector is a built-in type (the North American version has an external reflector).

3. The rear end of the engine mount must have a plate shape.

4 The rear fenders do not have side reflectors.

4. The rear fenders do not have side reflectors.

And, as a proof of being an official import car, of which only 100 were imported to Japan at that time…

1. Only the front window shield is made of light green tinted glass (the rest is clear glass).

3 The vehicle must be equipped with the 911S 5-speed transmission.

4. The engine compartment is equipped with a rain gutter.

We can see that it was the best option for the early 912 at that time.

In addition, the “maintenance history”, which is a dense history that supports the trust relationship between the owner and this ’67 912, also remains firmly.

Let me introduce the main points…

The carburetor is set to rich to avoid lean gas.

“Porsche is basically a very strong car. As for the parts, they are supplied in abundance not only from Germany but also from the United States, so they are very easy to maintain. This was a very convincing comment from the owner.

On the day of the interview, the ’67 Porsche 912 that appeared with its owner in the hills full of greenery in the town near Tokyo after the rain was so beautiful and attractive that I wanted to pay tribute to the mid-century German craftsmanship that mass-produced this lovely car…. Before I knew it, I had taken more than 400 photos for the 50 photos in this article…! Even the little time I spent with the 912 through the viewfinder, with its ever-changing expression due to the subtle differences in angles, was very dense and wonderful…!

I’ve tried to express as much as possible in the detailed photos, but as the owner said, it may not be a shiny showroom car… but it’s a car with such a rich beauty and charm that you can feel the deep flavor and profound history in the “trust relationship between the car and the people”!

“I’m not able to take care of this car at the level I’ve been doing physically…” This is the reason why some owners want to pass the car on to the next new owner.

“There are a lot of things that I’ve learned by driving this car, so I’d like you to drive it and enjoy it by all means…” The comments of the owner who had deeply enjoyed the charm of this 912 for 21 years were all deeply moved and touched my heart in this interview.

I’m sure that the “next new owner” who read this and felt the charm of this 912 will be able to feel the glimpse of the charm of the classic Porsche 912, which is easy to get to know, but actually rich and rich, and the more you know, the more you taste.

“The more you know about the classic Porsche 912, the more you can feel the charm of it.

This wonderful vehicle is currently located in Tokyo.

Since it is private, there are no fees, but we do ask that you pay the monthly automobile tax and recycling fee. Please make your own arrangements for land transportation.

The vehicles listed here are privately owned, and we have interviewed the owners at their request, and listed them as FOR SALE.

106896 Mile
Indicated at the time of acquisition (unknown)