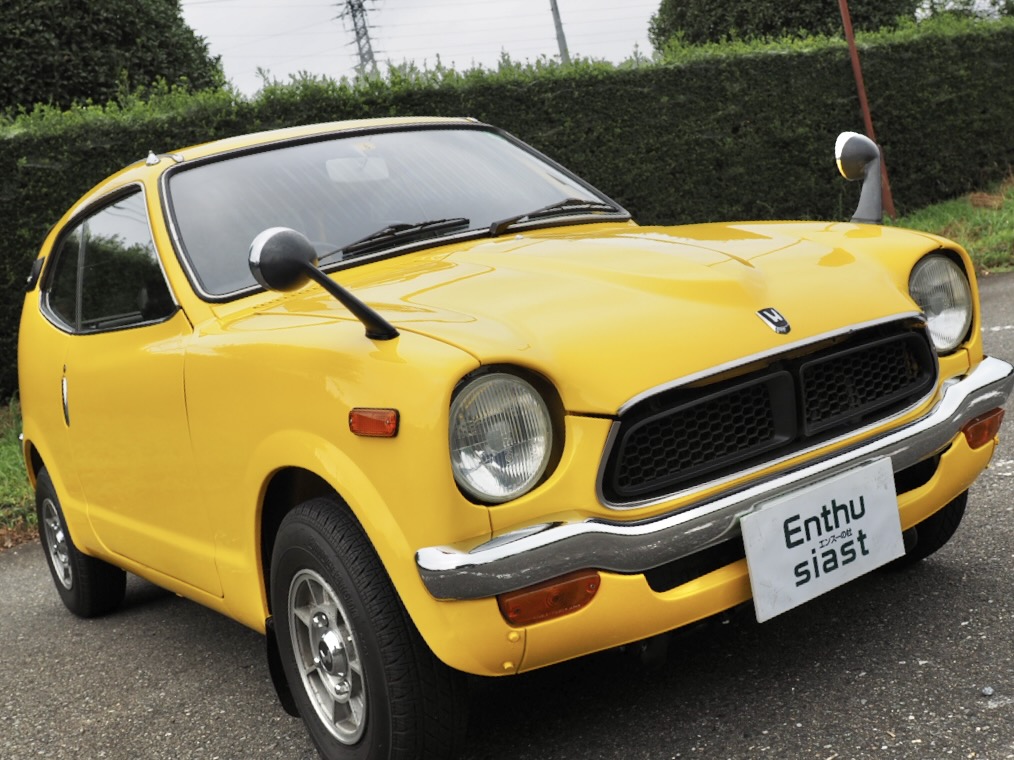 We met at the parking lot of a famous park in the prefecture, where Sayuri Yoshinaga also came to shoot a commercial for JR East, which was perfect for a photo shoot. As I waited while preparing for the photo shoot, a bright yellow Honda Z appeared in front of me with a really gentle and dry water-cooled two-cylinder sound….

For me, who was born in 1965, the Honda Z was a car that I longed for a lot when I was in elementary school.

For a moment, a phenomenon occurs in my mind that I can’t sort out….

It’s impossible to go against the flow of time, unless you’re on a time-slip through space-time…

What you see in front of you now is reminiscent of the 1970s.

The “dignified and vivid appearance” and the “fresh interior condition” are truly magnificent.

When I asked about it, I was told that it was not fully restored….

No… even after half a century, parts are still available for British cars thanks to the car culture that is firmly rooted, but this is a Japanese car from the 70’s… With almost no parts in stock, a full restoration would have been impossible….

The owner answered my interview with a smile on his face from start to finish, but he was not a normal person…! That’s how this interview started…!

We invite you to get a full sense of the real world…! Please take a look at the 50 photos below, along with the detailed video…!

This is the last lot of GT…

The following is an excerpt from Honda’s catalog at the time… Each grade was classified in a richly expressive manner as shown below.

ACT – a car for active people.

TS – A car for individualists who satisfy their sports spirit.

GT – Grand touring car for those who can afford it.

GS – A car for tough guys who are proud of their technique.

The bright yellow exterior was repainted a few years ago, and I checked the engine bay and inside the trunk, and it looks like it was repainted in the original color. The new paint is not freshly painted, but it has a nice calm atmosphere that matches perfectly, and I honestly felt that it was wonderful.

The resin frame of the “underwater glasses”, which is the identity of this car, was painted in gun metallic two years ago by the owner, and combined with the yellow body, it looks a bit modernized and makes this car even more unique.

Rich nicknames are a symbol of individuality…

“Underwater glasses” is a famous nickname in Japan, but it is also called “ski boots” or “clown shoes” overseas…

The late Soichiro Honda, the founder of the company, said, “This car looks like a bottle…! The long nose, which was fitted to the fullest extent of the standards at the time, and the crisply cut rear shape are even more novel today…!

I took a look at the entire body and underbody, which is less than 3 meters in length, and found no rust, dents, or repair marks. From the bottom of my heart, I can’t help but exclaim, “I’m amazed that it has survived…!

The Keihin twin carburetor air cleaner has been sculpted in a unique way, and the water-cooled engine compartment, which was the final model, is still the original except for the points that were later semi-transistorized. …! The underbelly of the engine bay is in excellent shape, including the transmission…!

Three years ago, I had to replace the front brake cylinder, brake shoes, and brake hoses when the brakes came off one day. At the same time, the rear brakes were repaired with a repair kit, and the rear bumper and rear light rings were re-plated to keep them in good condition.

When the tachometer was malfunctioning, he got a cable, but the cause was found to be a problem with the outlet on the engine.

Old cars, take your time... Finding parts patiently... This is the most enjoyable part of the process.

The owner smiles all the time and is very talkative…

He has been a big car enthusiast since he was young, and spent his sensitive years in the 70’s when cars were still in use. Even the VAN sticker on the rear glass of this car is a must-have item…! I’m sure there are many people who can relate to that….

If I ask you about your automobile history, you can find a distinguished lineup of Japanese cars such as Celica LB, 30Z, Familia, S600, and S800…. What has been the key to his success with all of them? “Finding the right parts patiently and carefully, and taking the time to finish them.

“Soft parts such as rubber are difficult to find, but hard parts are quite easy to find…”

These are very deep words….

“It’s the most fun to fix things like that while they’re still in your hands and make them good…! I’m like a repairman…” I was really impressed by his generous smile….

The Honda Z GT is in excellent condition, as if we had traveled back in time…

After all, a car expresses the owner’s way of thinking very well….

The condition of the car, and the pleasure of patiently searching for parts and waiting for them…

He is truly a collector with 100 years of experience! That’s how I felt when I interviewed him this time…!

During this interview, the owner kept saying…

“I don’t really want to sell…”

I remember that he said this five times.

He said that he had decided to give it away due to unavoidable garage circumstances….

I believe that the joy of taking care of and maintaining such a car will make the new owner’s life more enjoyable.

“The bright yellow color of this water-cooled Honda Z GT is in excellent condition.

Why don’t you share a fun time with the owner?

Please come to Maebashi for a look…

The vehicles listed here are privately owned, and are listed as FOR SALE after being interviewed at the request of the owner.

The content of the article is made based on the owner’s comment and what I saw and heard during the interview time of about one hour, so it may not be 100% accurate description of the actual condition of the car, and the content of the article is not all backed up. Please be aware that comments on the condition of the vehicle are based on the conditions at the time of the interview and the subjective view of the person in charge of the interview, and may differ from the photos and articles after a period of time has passed.

61889 Mile
Indicated at the time of acquisition (unknown)