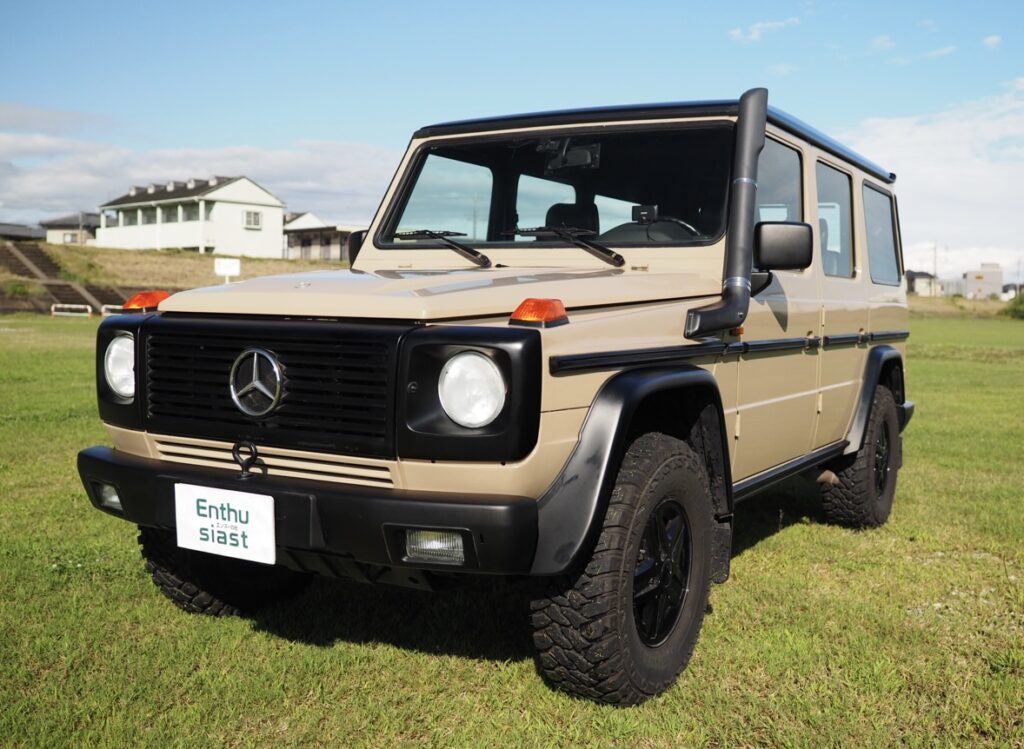 Sometimes it is very difficult to write a manuscript from an objective point of view in front of these fascinating neo-classic cars…. I have tried to get to the heart of the matter, so please read to the end. (By the author)

The Mercedes-Benz Gellendewagen, or Off-Roader in German, is an ironclad car with the backbone of a hardcore military vehicle that was built to conquer every corner of the earth. In fact, since its birth in the 1970s, it has been used as an ideal military vehicle in more than 60 countries around the world, and even the U.S. military, which has the world’s most powerful off-roader, GM’s Hummer, has ordered a large number of Gelendevagens to help resolve the recently concluded conflict in the desert.

Just as the Volkswagen Beetle went from being a car designed to move the German masses to a symbol of peace and world unity, the Gehlendewagen has evolved from its roots to become a truly casual fashion icon. As a symbol of casual fashion, and sometimes as a bourgeoisie monster truck, the Gellendewagen has undergone a dynamic transformation into an automotive icon loved by all…!

A dazzling, butch, linear beauty. A lovely yet menacing appearance... The charm of Geländewagen design...!

Since its introduction in 1979, the Gellendewagen has undergone a number of minor changes, but other than the engine and interior, the basic parts of the car have remained the same as when it was first launched, and it continues to maintain its unique form.

This dazzlingly straight, butch beauty…! The unparalleled design began when the first styling mock-ups were made of wood, as the car designers did not have the sensuous curves of clay to draw with….

Unlike modernism, which is derived from the European art culture of Art Nouveau and Art Deco, Japan is originally based on the wabi-sabi culture, which is based on straight lines in the design of shrines, temples, and houses. It may be an intrinsic love….

In addition to the design, the Gellendewagen is also the only hand-made car in the Mercedes lineup, although the price is miserably reflected by the quality of the Mercedes-Benz craftsmanship, which is outstanding compared to the other lineup.

This boxy, angular styling is composed of a body-on-frame structure…. It is one of the few cars to feature three fully locking differentials to conquer the roughest roads in the world….

A few years ago, when he was searching for a neo-classic car that would resonate with his senses on a nationwide scale, he happened to find this car in a distant location. The wheels were blacked out and the body was painted in a brand new sand beige color.

It was already in this color scheme when he purchased it, so we don’t know all the details about the paint job, but the color scheme matches the image of the Gehlendewagen very well, and the color remains glossy, giving off a fancy mood with a nice atmosphere….

In addition, the fact that the past records and repair history are still intact is also a place where you can have a very good impression of this unit. However, we have been able to confirm that the replacement of the meter cluster, which is sometimes found in Mercedes-Benz, was carried out after 190,000 kilometers, and the gauges that are currently working well indicate that the mileage is currently in the 14,000 kilometer range.

In addition, the steering wheel has been changed to a later model, which is also in good condition and can be accepted as a good impression if you don’t care about the original….

As for the current problems…

The left rear bumper, which is very solid, is wavy when viewed from the side, as if it was pushed from behind. There is also a crack at the top of the rear bumper. Please check this out in the photos and video.

The driver’s door and the blacked out side moldings had some coat peeling. You can see it in the photos.

In addition, there is a problem with the power windows on the right side of both the front and rear windows, which was confirmed by the owner’s favorite repair shop. In addition, we have also received an email from a customer who said, “This is an audio setting.

In addition, the owner said, “This is the way the audio system is set up…,” but there is no sound coming from the speakers that were recently replaced. The owner doesn’t usually use the audio system, so he wasn’t concerned about it, but he would like the new owner to try it first….

The owner really likes this car…

“The 300GE Long is the Gelende…! The L6 engine has a powerful torque and silky sound that pulls up the heavy body of the car… It is really a tough car. It’s a really tough car.

The owner is a meticulous person, and his past inspection and maintenance records are shown in the last photo.

Although it is now considered a neo-classic, the car is currently in very good condition, and I felt that it is ready to be passed on to the next new owner….

“It’s a car that I would really like to keep forever, but there are circumstances where I really have to let it go, and I’m really sorry, but that’s why I asked to publish it…. It’s a beautiful car, and I hope young people will drive it fashionably…” said the owner.

“Why are you letting go of such a nice GELENDEVAGEN? This was the answer to his question….

The engine has been upgraded to a full-time 4WD, and the exterior is wilder with overfenders and side steps… Yes, the car from the early days has finally matured and is now a “neo-classic…”.

It was a wonderful interview that made me feel that now is the right time to drive this car….

I’m sure that there are many people who read this article with patience and admire this car as a potential new owner, even if they were born in the same year as me.

For those of you who used to look at these cars as a child, imagine how much fun it would be to have a fashionable neo-classic car by your side in your daily life….

This vehicle is registered as a camping car with license plate number 8, and the luggage compartment can actually be flattened from the back seat, allowing you to stretch out your legs and stay in the car overnight. Double the fun…! My dreams keep growing….

It’s not like a car that starts up with the flip of a switch. Once you get a taste of this, you’ll never want to go back…! You’ll get a wonderful “life perk” that will allow you to fully immerse yourself in the deep and profound charm of neo-classical music…!

“I love the essence of the Mercedes-Benz Gellendewagen, which has become a luxury icon with a presence that overwhelms its surroundings and a charm that has remained unchanged for over 40 years since its birth.

Please come and visit us for a supreme tour….

As this vehicle has been inspected, the purchaser is responsible for paying the monthly automobile tax (￥46,900 per year) and the recycling deposit (￥19,940).

The content of the article is made based on the owner’s comment and what I saw and heard during the interview time of about one hour, so it may not be 100% accurate description of the actual condition of the car, and the content of the article is not all backed up. Please be aware that comments on the condition of the vehicle are based on the conditions at the time of the interview and the subjective view of the person in charge of the interview, and may differ from the photos and articles after a period of time has passed.