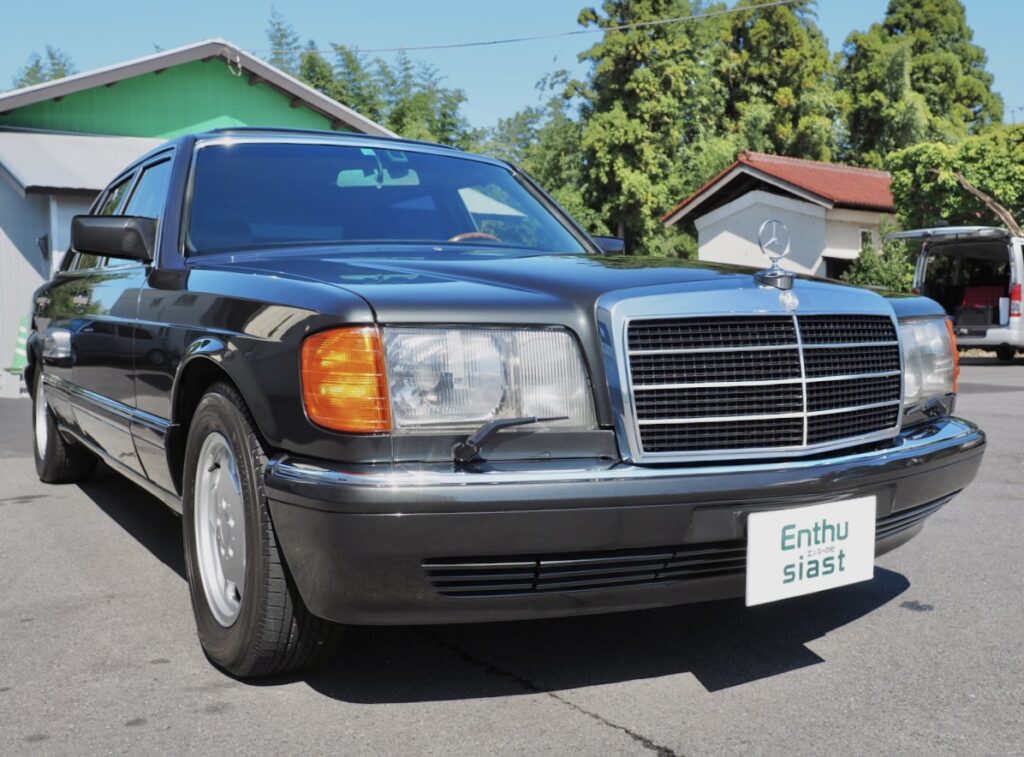 The crying child is silent... 560SEL, majestic, high class and rare Now is the time to drive this neo-classic...!

In this way, as I cover and write about cars on a daily basis, I come across many different owners and cars that have been cared for with a lot of love….
I feel that the greatest merit of private sales is that the car is maintained in excellent condition with the owner’s enthusiasm, and the “feelings” including the history of the car’s care can be passed on to the next person….
To be able to assist in this process, including the penetration of the classic car culture in Japan, is always a great feeling, and I am endlessly grateful to both the client and the buyer….

This time, we received a request from one of the most famous neo-classic cars. “Although it was said that the body would last 100 years, it is hard to believe that 30 years have passed since then.

I'll just have to wait and see... It is very difficult to find a 560SEL in good condition today...?

More than 30 years have already passed since “that time” when the whole country was booming with an unusual economic boom. I’m sure there are many people who are thinking, “There was so much back then, but ・・・・”….

The fact that it has become extremely difficult to find a Mercedes-Benz W126 560SEL in good condition in Japan today is largely due to the unparalleled “shenanigans of the Japanese economy and history”….

During the economic boom, the Japanese market was very attractive to foreign builders. Italian cattle and horse stamps, British angels, and the children of the autobahn were imported in amazing numbers, both officially and in parallel…. Over time, as these cars gradually appeared on the used market, there was a serious imbalance between supply and demand, and these luxury cars were resold at “saturated prices” that were unfair compared to their original “product value.

Japan has the world’s strictest vehicle inspection system, and there is plenty of money to be spent on these famous cars. Naturally, it is the discerning buyers in Germany, Europe and emerging countries who know the true value of these cars. Unfortunately, most of the “luxury cars in good condition” that are judged by these buyers are sent back to the sea.

In fact, even if you research the overseas market right now…

“This is a well maintained vehicle that was once used in Japan.”

The world’s highest benchmark for Mercedes-Benz to put the prestige of its brand mark on the most advanced technology…. Among the many famous cars of the past, the W126 S-Class 560SEL introduced today is a masterpiece that has been talked about passionately all over the world.

Launched in 1986 as the second series of the W126, the 560SEL is the top-of-the-line class with a long wheelbase for VIPs in the back seat, and is equipped with Mercedes’ 5.6L M117 V8 engine. As the name suggests, the “E” stands for Einspritzmotor (fuel injection system) in German and the “L” for long wheelbase. The “L” stands for long wheelbase, and the car was capable of cruising at more than 200 km/h on the Autobahn, terrorizing local rivals in Zuffenhausen and Bavaria, and was called the “world’s fastest saloon…” at the time.

Bruno Sacco, the chief designer of Mercedes-Benz at the time, repeatedly conducted wind tunnel tests to design an aerodynamically superior body shape….
His efforts included not only changing the front end and bumper shape, but also storing the windshield wipers under the hood, and using materials such as HSLA high-strength low-alloy sheets for the bumpers and side panels to reduce weight.
The M117 V8 engine, which uses lighter alloys and is significantly lighter, reduces fuel consumption by more than 10%, and the full-size saloon has a dry weight of 1790kg….

“The world’s fastest saloon, the W126 560SEL, was produced until 1991, at the height of the bubble economy, when it was handed over to its successor, the W140 series. In spite of the outstanding price of new cars at that time, a total of 75,000 units were released all over the world, and today it is considered to be the most successful S-class model….

The owner is a collector of classic cars….

In several fully enclosed garages in the prefecture, he has been carefully storing and managing a number of neo-classic cars for many years since they were still in service…. Because of the sheer number of cars, several of them, including this one, have been registered as cancelled, but all of them are accurately managed with a management ledger, and as you can see in the photos and videos, they have been kept in very good condition with their engines running regularly….

“As you can see in the photos and videos, he keeps them in very good condition. If necessary, he can ask his doctor to get the past repair history….

It’s hard to believe that this car is more than 30 years old… This W126 560SEL has a dignified appearance and shining body, but when I asked about it, I was told that it has the original paint… The AMG emblem is very interesting, but this is the “AMG specification” and it is the original 560SEL….

On the day of the interview, it was a very hot day after the rain, but the air conditioner was working perfectly and the engine was idling stably all the time….

“The air conditioner was working perfectly and the engine was idling steadily all the time. Looking at the condition of the 560SEL, we felt that it was no ordinary effort for the owner to preserve it, and we felt that today is the best chance to enjoy the 560SEL, which was called the best S-Class ever, because it has become a neo-classic.

The back seat is spacious…. It’s the long size of the S-class….

The “world’s fastest saloon” was a car that I sincerely thought was “wonderful….

In those days of the bubble economy, it might have been a “weeping car” on the street. But 30 years have passed since then, and it has just lost its oil (not oil), and it has a nice “vintage and withered look”….

I’m sure it has a special taste now…

The top class saloon car I longed for back then…

Please enjoy it in your daily life.

This vehicle is being offered for sale by a private individual, so no consumption tax or other fees will be charged.

The vehicle is currently registered for temporary cancellation, so there is no need to calculate the monthly car tax, but the buyer is only required to pay the recycling deposit.

This article is about a classic car, which is owned by a private owner, and I have interviewed the owner at his request.