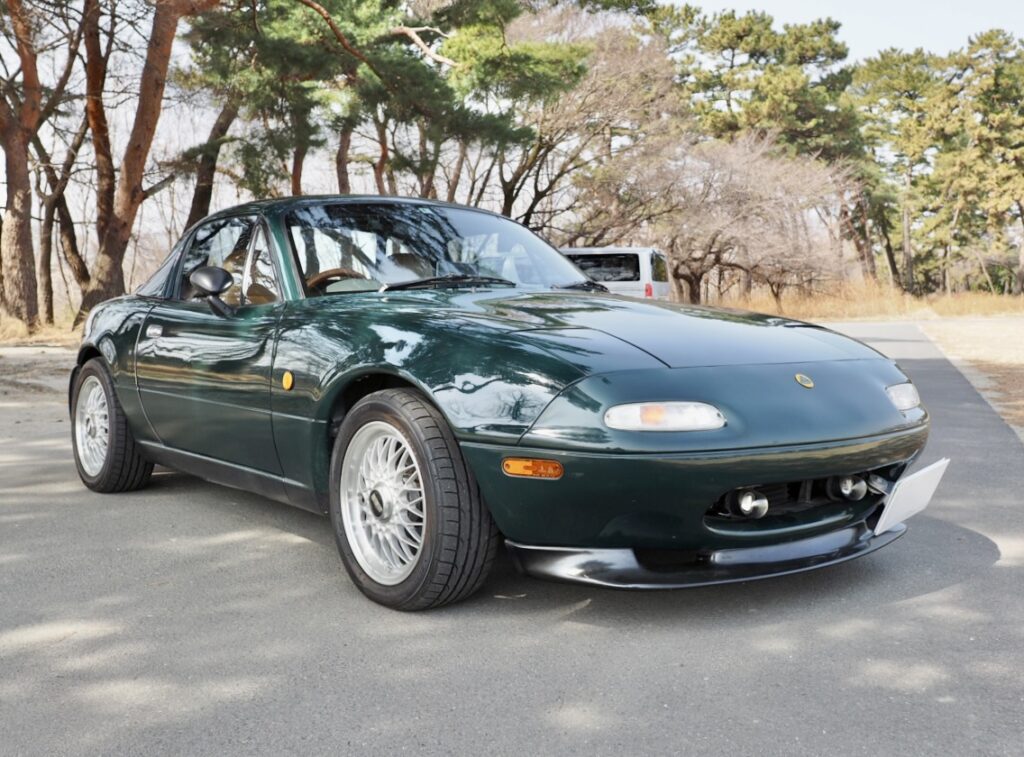 On the top slide you will find 50 attractive photos of the vehicle. Click on a photo to see it with its description.

The V-Special, with its neo-green body and BBS A roadster for adults. One of the most fun cars on the planet... The fun of driving the early NA6CE Roadster has been sublimated to the fullest by its lightweight enthusiast owner...!"

In September 1989, when the bubble economy was at its peak….

It was a summer day that I will never forget.

In the 1980s, sports cars were extinct due to the exhaust emission regulations of the 1970s. It was at the exhibition and test drive event of the early NA6CE Roadster, which was so crowded with young people that it seemed as if all the young people of that time went to Mazda dealerships.

After a long wait, I got into the red car that was waiting for me in open style and started to drive off…. I should have waited a little longer for the announcement and bought this one…! I regretted it greatly.

I was in the midst of paying for the late model SA22C (FB3S) that I desperately wanted to buy… The memory of the early model NA6CE Roadster that came back to me with such fond memories was as sensational as the Hanshin Tigers’ victory a few years earlier. I vividly recall now that it was an event….

I am sure that I am not the only one who feels that “the fact that there was a time when young people were crazy about cars” is clearly behind this event, and that there is an enthusiast path that continues to this day….

In addition to the stainless steel body, lightweight aluminum materials were used extensively for the hood and other parts, and the car weighs a mere 940 kg…. The B6 engine from the Familia was installed in a longitudinally mounted position, with attractive improvements for a sports car, such as a tuned intake and exhaust system, valve timing, and aluminum cylinder head cover…. The front midship layout, with the weight thoroughly contained within the wheelbase to reduce the moment of inertia, produces an ideal front-rear weight distribution for a sports car, and the behavior of the car is directly conveyed. The steering feel and the short-stroke gearshift, which can be operated with a simple turn of the wrist, appeal to the right side of the brain and the senses, and maximize the pleasure of driving a car…!

Thirty years later, the “Japanese lightweight sports car” package, which directly expresses the “driving pleasure” that humans instinctively feel, won first place in the Best Sports Car of the 1990s category selected by Sports Car International, a U.S. sports car magazine, as well as other awards around the world. It has enthused enthusiasts, so much so that in April 2016, after the fourth generation took over, total production exceeded 1 million units, setting a Guinness World Record for the world’s largest cumulative production of a “two-seat small open sports car”…………………

It is a fact that this car has undoubtedly enthused enthusiasts around the world with its pure driving performance….

Reminiscent of "British Racing Green". Neo Green" color with Nardi wood steering wheel and shift knob...! The V-Special was truly a roadster for adults, with a classic, high-end feel that set it apart from the basic model...!"

The early NA6CE Roadster, which went on sale in Japan in 1989, was selling very well…. While the wait for delivery continued for more than six months, Mazda took the opportunity to “catch up” with Roadster fans by exhibiting a shocking specification at the Tokyo Motor Show as a reference exhibit. The “Mazda2” was a further shock to the public.

The Neo-Green body color, reminiscent of British Racing Green, and tan interior with leather seats, Nardi wood steering wheel, shift knob, and parking brake grip…. Compared to the basic version, the high-end specifications of the V-Special are eye-catching. The “V Special” was truly an “adult roadster” with a classic, high-end atmosphere that set it apart from the basic model….

Thirty years have passed since then, and there are very few in good condition nowadays. The fun of driving the early NA6CE Roadster has been sublimated to a lightweight enthusiast owner...!

The owner is also one of the enthusiastic enthusiasts who were baptized in the domestic sports cars of the time. He is currently enjoying British lightweight sports cars and classic motorcycles in a very chic way.

In his memoirs, he told us that he had experienced the birth of the Roadster at the same time when he bought a new 2nd generation RX-7 FC3S, and that he was “quite moved” when the V-Special was announced.

He gave up his FC3S when he got married, but his desire to drive an open-air car through the fresh greenery and the shock he felt at the time made him want to make his dream come true…. He thought that one day he would go back to his roots and “if I were to drive a car, it would have to be an early NA6CE…” He was so excited to be able to drive a car like that.

When his life stage changed and the time came for him to fulfill his dream slowly, he searched without hesitation for a ’92 NA6CE V Special from a certain roadster specialty store…….

The balanced ride height, Kakimoto racing muffler, and front chin spoiler give it an avant-garde impression, but it has never participated in any races, and has been used for weekend early morning drives on winding roads and for longtime dream drives in the open with his wife in the very romantic Hokkaido. He has really been enjoying himself meaningfully, such as traveling.

The owner, who has been enjoying preventive maintenance before the car breaks down, has been very meticulous and has further brushed up this ’92 model.

Here are some of the improvements…

The top was replaced with a new external one, ensuring a very clean rear view.

Suspension replacement…RS-Factory STAGE chocolat springs, which can be said to be the NA standard, are combined with Kony dampers to achieve a moderate ride height.

After replacement, a 4-wheel alignment was performed, and since the Connie is a damping pressure adjustable type, the setting was changed to be supple and sticky like a cat’s paw.

Protein painted meter hoods have been replaced with new genuine ones.

The radiator fan has been replaced with a new high-efficiency mini-car fan, which improves the cooling effect and makes the air conditioner work better.

Driver’s side window regulator motor has been replaced with a reinforced type.

After the removal of iron powder, sap, and tar, the body and soft top have been coated by a professional polishing company.

The owner has kindly agreed to include these items.

As for current defects…

As the owner has also shown on the machine, there is a tear on the driver’s seat and the lower part of the side support, and although the car has been very well maintained, there are a few small dents and touch-up marks as shown in the detailed photos…. However, this is a survivor of its time…! If you accept these things as a part of the flavor, the charm will be further enhanced…….

After careful preventive maintenance, he was able to comfortably travel with his wife, which was his long-cherished wish, and has created many memories…. The owner of the car was very impressed by the excellent condition of the early NA6CE, which was in excellent standing condition.

Although so many V-Specs were exported, they were called “B-Specs” overseas at the time, but since the 25-year rule was lifted a few years ago, there is a high premium on good condition cars all over the world.

If you are an enthusiast, this early NA6CE Roadster is one of the most fun cars on the planet, and it should be on your “list of cars I want to drive for the rest of my life”….

By fixing it yourself and driving it for a long time, you will get more and more attached to it…

What other car has ever offered such a life-enhancing proposal?

By standardizing the dimensions of bolts and nuts to those that can be handled with ordinary hand tools, we proposed from the planning stage that the owner himself could do everything from brake pad replacement to suspension replacement and clutch plate replacement….

The current engine hoods of various manufacturers present exactly the opposite approach, with the contents covered by a cover that says, “There is nothing for the amateur to touch…” when opened….

I believe this is the reason why even after 30+ years, numerous aftermarket parts, Roadster specialty stores, and above all, a large community have sprung up and even the manufacturer, Mazda, has announced that it will start restoration services in 2017….

This is exactly the kind of car that enthusiasts are looking for…! I think that is a good thing.

The V-Special with the Neo-Green body and BBS shoes is truly a roadster for adults…one of the most fun cars on the planet…the fun of driving the early NA6CE Roadster has been sublimated to a lightweight enthusiast owner with a great taste…!

A truly wonderful piece of work.

Please come to Maebashi to talk with the generous owner and enjoy the test drive experience.

No sales tax or other fees will be charged as this is a private sale.

Please note that you will be required to pay the monthly automobile tax and recycling deposit upon purchase.

The content of this article was written based on an interview with the owner, materials received, and a test drive experience in the passenger seat during a 3-hour interview starting at 10:00 a.m. on March 5, 2022.

Please note that this may not be a 100% accurate description of the condition of the car due to the limited time available.

The content of the original manuscripts is based on careful research in Japan and overseas, but is not backed up by any on-site inspection or other verification. Please note that comments on the condition of the car are based on the weather and conditions at the time of the interview, as well as the author’s own subjective opinion.