On the top slide you will find 50 attractive photos of the vehicle. Click on a photo to view it with its description. 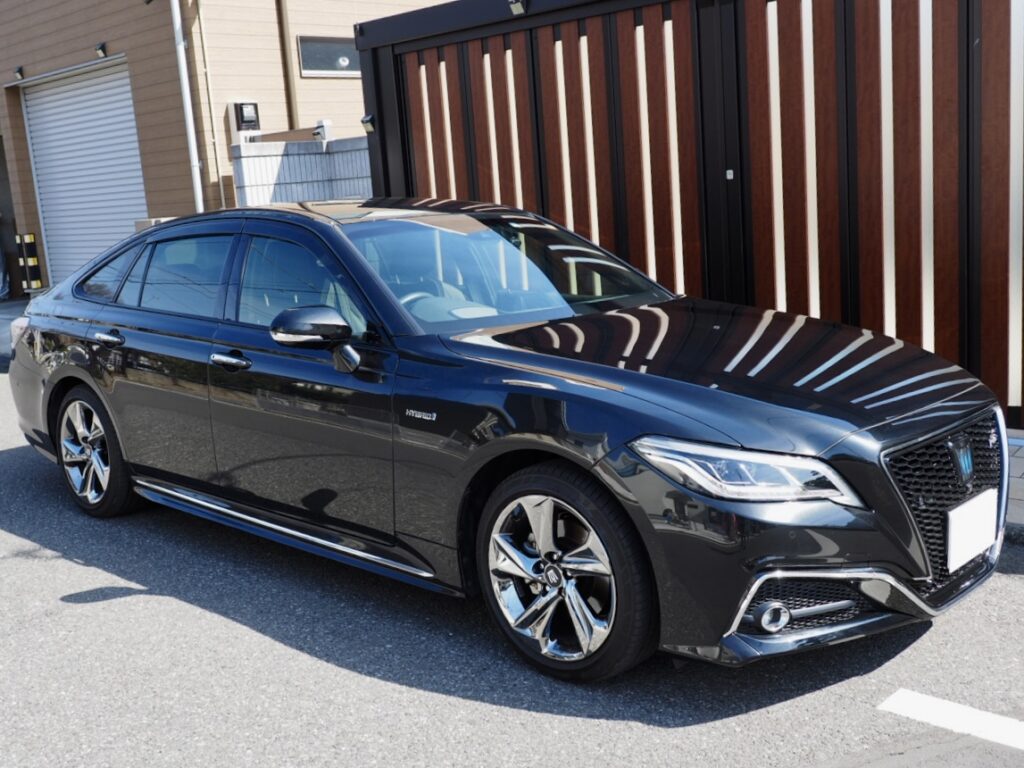 From "Someday a Crown..." to "Finally my Crown..."... The longing of the baby-boom generation has been transformed into "the ultimate driving experience of the individual era"...! The last Crown 220-series early-model RS with the engine was an insanely fun super sports sedan that the world adored as a domestic-only model...!"

The first generation Crown went on sale when the baby boomers born between 1947 and 1949 were in elementary school, and when they were in their 20s, Ms. Sayuri Yoshinaga whispered to them through a CRT TV, “Beautiful Japanese Crown…” In 1983, when they were in their 30s, the seventh generation When the Crown was born, it was finally whispered, “Someday a Crown…” This catchphrase will remain in your mind forever….

The Crown, which became a long-time hit product of Toyota supported by the “realization of dreams” of its predecessors, has undergone a fascinating evolution, but with the times came a “time of change” and the current In the 14th generation and 210 series, one model ahead of the previous model, the sales ratio of the “Royal” and “Athlete” was reversed, and the number of customers who had purchased a car from a catalog without seeing the actual car was now increasing. The baby boomers’ image of the “company (president’s) car” was at a crossroads with the shift to a “diversified and personal car.

Toyota envisions a new generation of leaders in their 40s and 50s who will lead Japan in the future. Toyota was determined to convince this discerning generation, which had experienced the bubble economy as well as a period of massive imports of European luxury cars, with “design” and “Japan’s unique technological capabilities” as well as a “driving performance” that surpassed European cars.

The last Crown born in this way…

The 15th generation 220 series Crown, presented as the “last Crown” with engine including hybrid, is more and more interesting the more you drive it… and the more you drive it in…! The super mature content of this “super sports sedan exclusively for the domestic market” will greatly fascinate enthusiasts as we move toward the era of “My Crown at last…” that symbolized the era of the individual…!

As a model exclusively for the domestic market... it was created from the unchanged overall width of the previous generation Crown, 1800mm, which has been thoroughly studied on the roads of Japan. The new formula is...! The pursuit of thorough body rigidity has been forged on the world's toughest circuit, the Nürburgring...! With the potential to duck a sports car on a mountain pass Super sports sedan...! Translated with www.DeepL.com/Translator (free version)

Toyota’s “Challenge to Change…” for a new generation was to add a new challenge to the long history of Crown….

Spot welding to increase body rigidity, for example, was pursued by drilling holes in all possible locations, temporarily fastening with screws, repeating driving tests, and repeating an unbelievable number of tests to find out what effect the spot welding had on the human senses, including areas that cannot be measured with machines, in search of the optimal areas.

Furthermore, the rigidity of the body was dramatically improved through the use of die-cast aluminum front suspension towers and a significant increase in the amount of structural adhesive material applied. The stability during cornering and the responsiveness of the steering wheel have been improved…!

The chassis thus refined was taken to the Nürburgring, said to be the world’s toughest circuit, where it was worked up to the point where Crown’s rigidity on the springs was overwhelmingly superior to that of other European cars, and was made into a “sports sedan that can be stably driven around corners without moving its eyes. …!

The RS (Runabout Sports) badge on the grille and tail end of the car, which proclaims the car’s characteristics….

A 2.5-liter naturally aspirated four-cylinder hybrid engine sits in an engine compartment that would fit a V8. It is truly amazing how modern and efficient the powertrain is…!

In addition to the chassis design, the proportions, which feel much wider and lower than their predecessors despite the Crown’s traditional width of 1,800 mm, are the result of a method of condensing the body to make the tires appear overhanging, and the image of a lowered center of gravity is effectively 10 mm lower than that of the previous generation. The adoption of Six Light Windows, a first for Crown, has created a truly flowing, fastback coupe-like silhouette from the roof to the tail end….

This alone is an attractive enough “image of a car that enthusiasts desire to drive,” but to this is added a modern, cutting-edge system that is uniquely Crown…!

The enumeration of the crystallization of Japanese technology that amazes the world and the installation of systems for the coming age is a very attractive expression of “Finally, my Crown…” that reflects the current era….

I will limit myself to a list of bullet points, as they can be found in the catalogs…

The first connected car that continues to challenge and innovate in pursuit of “connectedness that extends the functionality of the car” and “evolution in design, driving, and safety performance.

All models come standard with DCM, an in-vehicle communication device equipped with connected functions such as “e-Care Service” and “LINE My Car Account,” which allows customers to receive driving advice and vehicle diagnostics remotely.

The pre-crash safety system adds nighttime pedestrian and daytime bicyclist detection functions, Lane Tracing Assist (LTA) assists steering to keep the vehicle in the center of the same lane when radar cruise control is used, and the system displays road signs recognized by the camera on a display screen to help the driver see the road signs. Road Sign Assist (RSA) has been added to reduce missed signs and promote safe driving.

It is indeed a fully equipped version of Toyota’s flagship car of the new era, the Crown.

The owner, who is a hardcore enthusiast and loves cars, purchased this 220 series early model Crown RS as a new car to enjoy daily driving, and it runs only 8200km. The car was stored and managed in a state that could be described as "almost freshly unloaded"...!

The owner, who has a great love for cars and has driven over 140 old and new cars from domestic to imported cars, and whose relatives are related to Toyota, purchased this car as a new car registered in November 2048, just after the model change in October 2019. It is a 220 series early model Crown RS.

The owner felt that the design of European cars such as Mercedes-Benz was becoming more and more bloated as the years went by, and that the trend was “too modern. He chose this last Crown as “the Crown of my era” because his father, who was also a car enthusiast, had driven the first generation Crown, and he and his wife, who loved to drive, used it for their daily driving.

He and his wife, who loves driving, use it for their daily driving. They were enjoying the fuel efficiency of the hybrid, which is well over 20 km.

We always try not to disappoint prospective buyers by looking for any negative points including exterior and interior, and try to inform them in advance, but the car has been cherished in the garage by the owner who is full of love for cars, and has only 8200km on the odometer. I couldn’t find any…. It is safe to assume that the car has been stored in almost freshly unloaded condition….

The owner, who was very pleased with the car and boasted about it with a big smile, was asked why he was giving it up…. He said, “I want to choose a small manual car that my wife can use as an everyday car. ・・・・ We thought it was a good idea to choose a manual car as the ultimate countermeasure against mis-starting…….

Anyway, it is a beautiful car….

The advantage of “no sales tax” is very useful only for private sales…!

We highly recommend this car as a very affordable option for those who are looking for a matured 220 series as their “last Crown…” and also for those who have renewed their appreciation of the deep appeal of the Crown.

For more details, please check out the video shot by the author….

The more you know, the more profound the charm of the last Crown, a condensed version of Toyota’s technological prowess…

It was so wonderful….

Although I usually write about imported classic cars and old Japanese cars, when I write about new fascinating cars like this, I fantasize about how my children and wife will surely be happy to see me driving this car (・・・・)….

Coincidentally, at the time I started writing this article, it was announced that new orders for the 2L turbo model of the current Crown would end on February 10, 2022, and the final orders for the 2.5L hybrid and 3.5L hybrid would end on March 13, 2022. Furthermore, due to the capacity of the production line, there is a limit to the number of units that can be produced, and the number of units available for order is displayed on the dealers’ order system, and the number is decreasing daily.

The countdown for The Last Crown has finally begun…

With such universal feelings

From “Someday a Crown…” to “Finally my Crown…”… The longing of the baby-boomer generation has been transformed into “the ultimate driving experience of the individual era”…! The last Crown 220-series early-model RS with the engine was a super sports sedan with a lot of fun that the world adored as a domestic-only model…!”

I have titled this article “The first time I saw this book…”.

The Crown has been desperately transformed against the backdrop of today’s market. This is a wonderful car that overflows with such feelings.

This very nice "2019 Toyota Crown RS 220 Series Early Model" is a It is currently located in Saitama Prefecture.

This article was written based on an interview with the owner, materials received, and a test drive experience during a 3-hour interview starting at 1:00 p.m. on March 7, 2022.

The content of the original manuscripts is based on careful research both in Japan and overseas, but we do not have all of the information backed up by on-site visits or other means. Please note that comments on the condition of the car are based on the weather and conditions at the time of the interview, as well as the author’s own subjective opinion.