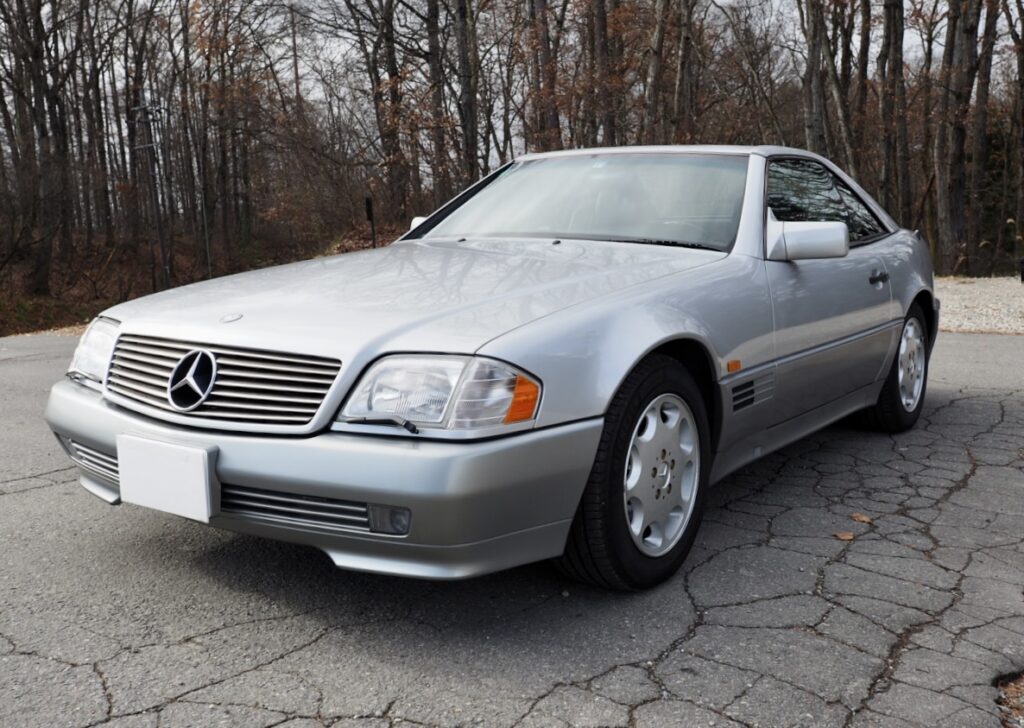 "The world's most elegant and noble roadster is now the world's most hotly-anticipated neo-classic...! The super sensual and sensational 1995 R129 SL320 is a car that will make your dreams come true..."

Hall of Fame car designer Bruno Sacco described his masterpiece R129 SL series as “the car with the most perfect profile”….

The owner of the R129 SL320, who has driven several neo-classic Mercedes-Benzes in his life style, says that “the early and late models are completely different…”.

What kind of fascinating car is the 1995 R129 SL320, the last model of the R129 SL series, which has been called the world’s best roadster and the technical masterpiece that brought Mercedes-Benz into the 21st century?

This article is my attempt to describe it based on my interview….

The lineage of the Mercedes-Benz SL, which started with the 300SL in 1952 and continued to be the world’s best executive roadster in every way, continues to capture the hearts of enthusiasts around the world for more than half a century as a “symbol of a rich life”….

In the 1980s, when the Daimler-Benz spirit of “Das Beste oder nichts” (the best or nothing) was still strong, Daimler-Benz set out to create “the world’s best roadster” in terms of styling, interior, driving and safety, while inheriting the tradition of the SL. The fourth generation of SL series, R129, debuted in September 1989.

This technical masterpiece was the last model to be developed under the “cost plus method”, which meant that the price of the car would be significantly higher than that of the previous model, and it became the “world’s best roadster” both in name and reality.

Named one of the five most important automotive designers of the century, along with Giugiaro, Bertone, Bugatti, and Pininfarina, Italian-born designer Bruno Sacco worked for Mercedes-Benz from 1975 to 1999, first as chief stylist and then as chief designer, responsible for the visual appearance of Mercedes-Benz….

The Mercedes-Benz E129SL series has been given the body rigidity, safety, and weather resistance critically needed for a roadster, with cutting-edge technology and amazing quality that was said to be excessive.

Bruno Sacco has added a new appeal to the R129 SL series with an exterior design that combines the basic style of the rear-wheel drive sports car, “long nose and short deck,” inherited from the SL series, with a modern aerodynamic efficiency design and an elegant wedge shape….

The safety and rigidity of the R129 SL series as a roadster is achieved by the use of an open-type monocoque body with a shock-absorbing mechanism on one side of the body that disperses the impact in three directions, and a unique protection structure that absorbs the impact in stages by changing the material of the floor and front member.

In terms of safety, an automatic roll bar that pops up in just 0.3 seconds, using three layers of high-strength material and with a load capacity of 5 tons, provides the safety of the world’s best roadster….

The world’s first power seat with five built-in motors and a seatbelt mechanism integrated into the seatback also contributes greatly to the safety and comfort of the world’s best roadster…. Dual front airbags, anti-lock brakes, traction control and an electronically controlled limited-slip differential are also standard features of the R129 SL series, which is known for its virtue of “overkill”….

"You can't find it... You have to wait to meet the best... The search for the R129 SL320 in good condition that dominated the bubble era is an extremely difficult road..."

Late 1980’s… More than 30 years have passed since “that time” when the whole Japan was booming. The reason why it is very difficult to find “good condition” R129 SL series in Japan today is due to the prank of the Japanese economic history.

In the midst of the economic boom, the Japanese market was a very attractive big market for foreign builders. There was no shortage of official imports of Italian cattle and horse seals, British angels, and Autobahn children, and an astonishing number of parallel imports were flooding the streets. As they gradually appeared on the used market over time, there was a serious imbalance between supply and demand, and these luxury cars were resold at “saturated prices” that could be said to be unfair compared to their original product value.

In the past, these luxury cars were resold at “saturated prices” that were unfair compared to their original product value. There is a strict inspection system in Japan that is unparalleled in the world, and a lot of money was spent on these cars. Naturally, it was the discerning buyers in Germany as well as in Europe and emerging countries, who knew the true value of these cars. Unfortunately, most of the good specimens that they were able to identify crossed the sea again and returned home….

As a result … regrettably, it is extremely difficult to find a car that has been well maintained and has a good maintenance record from the first owner … “You can’t find it even if you look for it … you have to wait for the encounter” …

The important point to determine is whether or not the car has been invested in with a wealth of insight…!

In this way, a handful of genuine cars that have passed through the baptism of time and are in good condition will become “Neo-Classics” with a new sense of value, and in today’s motorized environment where individuality is lacking, they will radiate a surprisingly attractive glow and rich color that will greatly color the lives of those who own them.

Please watch the video and let me share it with you…!

The owner, who has a lot of experience with the SL, dared to look for an early model that would allow him to experience the “cost is no object”, and with an engine 70kg lighter than the V8, he could enjoy the original taste of the SL only with the M1049 3.2L straight 6. That was it….

He was introduced to this car by his acquaintance and bought it without hesitation.

The two-tone color of the body side and the bumper of a more complicated shape that seems to have cost a lot of money, although it was discontinued right after this year model, is the place where the owner was concerned as a characteristic of the early type made with “cost is no object”….

According to the owner, “In the late model, you can see many generic parts from other Mercedes-Benz, but in this early model, there are no such parts, and you can feel the enthusiasm of Mercedes-Benz at that time, which spent a lot of money to send out a good product to every single part…”. He said…!

A good sound resonated in my heart, and the massive door closed with it….

The shape of the seat fits my body very well and it is very easy to operate the car.

The steering wheel is also a good size for early models.

The high quality interior and the interface that shows that a lot of money was spent on it.

The controls are so functional that they seem to be of excessive quality.

I completely forgot that this car was an open body with a hard top, and the amazing body rigidity is one of the best parts of the early R129 SL.

Let’s try to move it…

The M1049 3.2L straight 6 engine, with its smooth and seamless transmission, elegantly accelerates the world’s best roadster of incomparable quality. The M1049 3.2L straight-six short-stroke engine gives the driver such a sensual ride that there’s no time to worry about specs like 235 hp at 5600 rpm.

The modern interior space with black leather as the main color is full of superb taste, and is wrapped in the “rich smell” unique to Mercedes-Benz….

And then it accelerates…!

It’s sensual, it’s exciting, and it’s so rich that it touches your senses to the point of making your right brain “tingle”.

This is the best SL in the world, a car that has the power to impress everyone….

When you drive the early R129 SL320 in good condition, you will understand that it is the SL of the best era…!

The roof opens and closes normally, including the soft top, but the roof switch flashes and chimes 9 times when the engine is started, then stops.

There are some minor scuffs on the side of the rear bumper that you can’t see unless you ask, and there is a rice grain sized paint chip on the rear part.

As I write and interview rare cars on a daily basis, I often find myself wondering about them.

They must have decided to let go of their cars due to various reasons, but when I interview them, their eyes sparkle as if they were their own children, and they never seem to be in a mood to let go.

After a long time of hard work and effort, they finally found a superb car. They took care of the car like their own children for many years, and of course, if there were any problems, they took care of them immediately and finally let go of the wonderful car.

I asked him, “Why would you let go of such a wonderful car, the early model R129 SL320? The owner replied with a smile, “Because it’s finished…”.

I think I understand…

Dreaming of the finished look of his precious car, he pursues it and enjoys the process itself….

I’m sure there are many enthusiasts out there who can relate to this….

The most significant thing about private sales is that you can introduce a valuable car to someone who understands its value.

The world’s most elegant and noble roadster is now the world’s most hotly-anticipated neo-classic…! The ultra sensual and sensational, the superb early and final 1995 R129 SL320 is a car that will make your endless dreams come true…”

You can’t find it… You have to wait for it… Once you get it (this time…), you will never let it go… Light and exhilarating, light and agile, elegant and flowing, this is a neo-classic that will last a lifetime, and will surely change the enthusiast life of the new owner reading this…!

Please come to Nagano Prefecture to see the supreme….

You will be required to pay the monthly car tax and recycling deposit for this vehicle.

The vehicles on this page were posted on “Estate Sale®︎ Supremacy”, a cross-border e-commerce site for cars.

What is a “Supremacy” estate sale?

Estate Sale®︎Supremacy is the Japanese version of the North American cultural estate sale, which introduces cars with the owner’s thoughts and feelings through interview-based manuscript preparation, and organizes things and minds.

The content of this article was written based on interviews with owners, materials received, and contact experiences during a three-hour interview at 10:00 a.m. on December 5, 2021.

Please note that due to the very limited time available, this may not be a 100% accurate description of the condition.

Please be aware that the condition may not be 100% accurate. Please note that comments on the condition of the vehicle are based on the weather and conditions at the time of the interview and the author’s subjective opinion.

Thank you very much for your interest.a