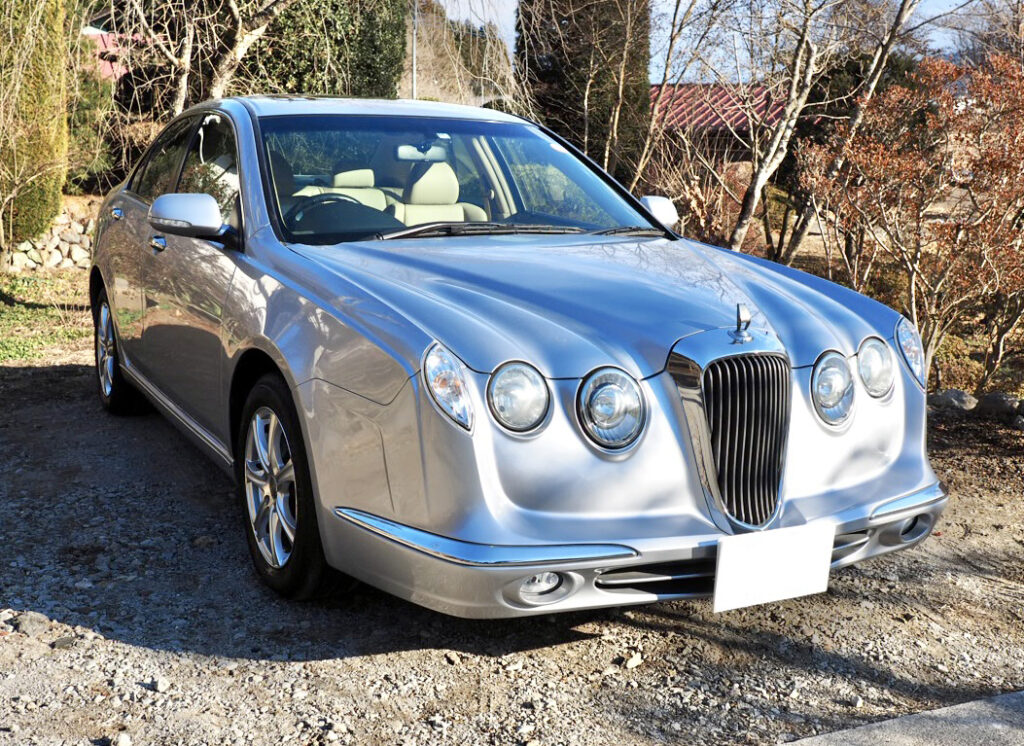 It's a unique mask. I don't really want to sell it... The owner said.... There are only 450 of these ultra-rare vehicles on the planet...! The best choice to express your individuality in this age of diversity is a superb, low-mileage car that is the work of a drunken automaker..."

Build the car you want to build…”

There is no doubt that these cars are the best companion to express one’s individuality and color one’s life as a precious classic collection that has captured the hearts of enthusiasts all over the world….

Also, “We want to do what we want to do… We want to promote a business that no one else will do…! This passion becomes a product, and we pave the way with our unique marketing… The energy of people filled with business romance to “achieve their dreams” is the greatest driving force that touches the hearts of customers, and it is the moment when a product filled with soul is recognized by the world…

Mitsuoka Motors, Japan’s tenth automobile manufacturer, located in Toyama Prefecture, is a wonderful company that strives to fulfill the business dreams of its founder through the concerted efforts of its employees.

The “breakthrough” of Mitsuoka Motors has been dizzying these days. The open two-seater “Rockstar”, based on the Mazda MX5 and reminiscent of the C2 Corvette, for which the company announced a limited production run of 200 units in 2018, has sold out, and a special limited edition car to commemorate the sale has been raffled off for 990,000 yen. In addition, sales of Mitsuoka’s first SUV, the Mitsuoka “Buddy”, which is based on the Toyota RAV4 and has the American mask of the 1980s, have been very strong, and the planned production volume for 2021 was 50 units. This year, the number of units planned for production in 2021 was 50, but it has been revised upward to 300 units, and the business plan that was expected to be achieved in four years after the launch is about to be achieved in just one year.

The unique marketing of Mitsuoka Motors is highly appreciated in the UK, where the diversity of automobile culture takes root, and Road&Track magazine called it “the strangest automobile manufacturer in Japan” and praised it as “a mysterious automobile manufacturer from Toyama Prefecture, whose name has been unknown to the public for a long time, is suddenly coming into the limelight….

With the theme of “free car manufacturing with dreams”, Mitsuoka Motor Co., Ltd. aims to be the only one in the domestic automobile industry, and manufactures about 500 unique vehicles per year, which are completely different from those of major automobile manufacturers, by hand and sells them both domestically and internationally.

Mitsuoka Motors was founded by Susumu Mitsuoka in February 1968 as a sheet metal painting company in a renovated stable that he initially rented. One day, he saw the simple structure of an Italian micro car that a customer had asked him to repair, and thought, “We could make one of those ourselves…” So, in 1981, he began to develop and manufacture domestic micro cars that could be driven with a moped license.

However, in 1985, the Road Traffic Law was amended to require a regular driver’s license for microcars, and the zero-han car business, which had grown into a hit product, quickly declined…until they were forced to close the factory.

He was forced to close the factory. “In business, even if you fail, there is always a second chance…!

It was really fun! This was a big hint that led Mitsuoka Motors to create its own original cars.

In 1994, Mitsuoka Motor challenged the then Ministry of Transport and Ministry of International Trade and Industry (MITI) head-on, and became the tenth car manufacturer to be certified in Japan. Today, Mitsuoka continues to develop its business at a pace of one car a day, “handcrafting with all its soul,” and valuing each and every customer who rides in its cars by “making cars with dreams,” which the major companies cannot imitate….

Based on the concept of “giving people a more fulfilling life,” the front mask features a classic vertical grille in the center and four round-eyed headlights.

It is the spirit of Mitsuoka that has transformed the Honda Accord, which was once full of European taste, to this level…!

The most popular of these was the early model 24LX with full leather seats and i-Vtec.

The Honda-made 2.4L inline four-cylinder DOHC i-Vtec is known for its…

As with the Accord, the i-Vtec comes standard with driver and passenger airbags, ABS with independent control for each wheel, and VSA brake assist. At that time, production started after the order was placed, and it took roughly a year before the car was delivered…! It was loved by enthusiasts for its overwhelming presence and rarity, with only 450 units produced.

There are no defects that the owner is aware of now.

Please check out the video for more details.

I really...really want to keep it..." The owner's feeling of not wanting to let go of it and and how it came to be listed..."

From the way he acts to the way he talks, the owner is a gentleman with a wonderful personality. He has a special feeling for the early model Silvia, which was even more expensive than the Cedric Special at 50,000 yen (in 1965, when the starting salary for college graduates was 19.610 yen), and he is an enthusiast who has owned several of them.

One of them is a person who cherishes cars whose history itself is too precious to write about here, and he fell in love at first sight with the unique looks of this early model Mitsuoka Nuera 24LX that his friend had for a long time.

He enjoyed the unique looks of the car in the garage, and occasionally took it out to enjoy the sensual drive of the 2.4L straight 4 i-Vtec. He decided to keep it in the best condition for the rest of his life, just like his other cars.

The owner said from the bottom of his heart, “I really, really want to keep it…because there are only 450 of them with only 29,000km or so…and there will never be another one as beautiful as this one…”.

Actually…. The reason why I had to let go of the car was because of the “great opposition of my family”….

I’m ashamed of this car… I don’t know what the neighbors will say…” When I park it in the garage, I want it to be parked headfirst so it can’t be seen…”

This is exactly the kind of story that can only be told by Mitsuoka Motors, a company that creates cars full of individuality and does not aim to please everyone.

I don’t want to sell it after all…”

The more I researched Mitsuoka Motors, the more excited I became about the concept, and the more I wrote this manuscript in one go.

Without relying on market research, “We make the cars we want to make…! If you love what you do, there will always be someone who will accept it. The cars that Mitsuoka Motors has created over the past half century since its founding have built a great relationship of trust with the customers who desire them, just like the owner of this car, and have sublimated into something that can be treasured for a lifetime. We want to make our products unique.

Last but not least, since the engine and suspension remain the same as the base vehicle, maintenance can be done at a regular maintenance shop…. As a matter of fact, there is no such business model in the world…. This is undoubtedly the unique appeal of the “other” Mitsuoka Motors.

“The unique mask is the best!

Please come to Gunma Prefecture to see the Only One.

Please pay the monthly car tax and recycling deposit when you purchase this vehicle.

The vehicles on this page are from the Estate Sale®︎ Supremacy, a cross-border e-commerce site for classic and collectible cars.

What is the supreme and best estate sale…?

This article was written based on an interview with the owner and materials received during a four-hour interview that began at 1:00 p.m. on January 6, 2021.

Please be aware that due to the limited time available, the information may not be 100% accurate.