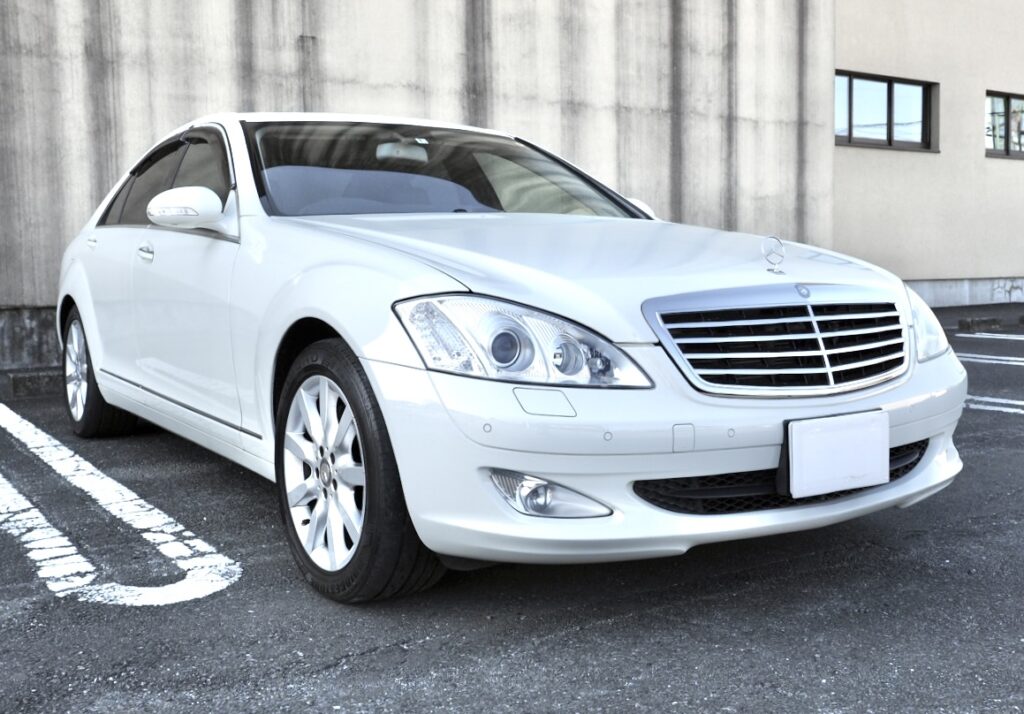 If you're new to Mercedes, or even if you're a Mercedes connoisseur, you should not hesitate to take a look at the S-Class in good condition. The appearance is exactly the same as the S500, and the daily use of the S350 with the proven V6 is just superb...! Maximum product value! The S-Class is two generations old and has lost its fat, and now is the time to drive it..."

The Calcite White color of the car shines in the bright light of an early February morning. Not a single scratch on the exterior of the car, and the finest leather seats peek through the window…. The dignity of the S-Class, which was born in Sindelfingen, Germany, and has been coveted by drivers all over the world, stands before my eyes without fading in the slightest, even in the era in which the 7th generation S-Class, my grandchild, is currently active.

This is a very nice early model W221 S350 with clear records from the first owner, with a beautiful appearance that is hard to believe that 15 years have passed, and the mileage is only 45,000 km at this time. The fact that this “most elegant and safest space in the world to travel” can be purchased for less than 1/10th of the price is astonishing. If you’re an enthusiast, you’ll find that an S-class in good condition is one you don’t want to hesitate to drive.

"Take the steering wheel away from the chauffeur... The culmination of a driver's car's appeal... The fifth generation of the Mercedes-Benz S-Class W221..."

The S-Class, which has always been the flagship of Mercedes-Benz, has led the times with the latest technology that foreshadows the future. After the millennium, the concept of the bloated 3rd generation was revised and the 4th generation W220 (1998-2005) was equipped with an environmentally friendly active cylinder, and the previous generation was improved with a more luxurious, environmentally friendly and fuel-efficient engine. This was followed by the 5th generation W221 (2005-2013), which regained the dignity of the top class S class and was designed in the style of the current 7th generation….

The design work started in 1999, six years before the launch, at the Advanced Design Center in Tokyo, and the final design by designer Gorden Wagner was completed in 2001… The W221 is truly a millennium design Mercedes-Benz.

The styling of the W221 is clearly more refined and dynamic than that of its predecessor, the W220. The previous generation W220 was a model that was downsized to fit the times, reflecting on the W140, which was pointed out to be bloated against the environment. However, the W221, with its dynamic and energy-saving engine performance, had a large front grille and overhanging rear fender-like design, and the interior space became luxuriously spacious.

The interior image has also been changed from the previous generation W220, which had a lot of plastic switches, to one that is full of luxury. Leather and metal switches are used to enhance the quality of the interior, giving it a more modern and millennium impression…. The driver interface is equipped with two large panel screens that graphically display the analog speedometer, while the center of the screen displays the car’s distinctive command system and navigation screen, providing the driver with a variety of information in a safe manner…. …

The W221 was also the first car to feature “Direct Select” controls. The selector lever on the right side of the steering column allows the driver to upshift, downshift, park and reverse with the touch of a button while holding the steering wheel.

One of the main features of the W221 is the ability to switch between chassis and transmission modes with the S, C, and M switch buttons on the center console….

If you select the manual mode, the car controls its posture in the same way as in the sport mode, but with the direct select mentioned above, you can freely control the transmission….

In addition to the standard features, the following safety features are provided…

The car is equipped with many safety features that are among the world’s best, including options that are too numerous to mention.

"Marketing magic... Except for the emblem The S500 and S350 have the exact same appearance and chassis... If the ride quality is the same, the S350 with the V6 is The S350 with the proven V6 is suddenly more interesting..."

Even in the European and North American markets, the Mercedes S-Class was always demanded by customers for its “top quality” and “good cost performance”. However, as a “novel marketing strategy” to meet the needs of the customers, the W221 was designed with the exact same body dimensions and wheel design except for the emblem.

In addition to a V6 engine with higher performance and an advantage in terms of fuel consumption, and an Airmatic suspension that is standard equipment on all grades, the S350 is equipped with a variety of equipment that is the same as the higher grades, and the actual ride quality has been upgraded to the point where it can be said that there is no difference at all.

It was a cold and windy day, but it was a really nice car that warmed my heart…

The S550 is completely original except for the emblems and tuning done by the previous owner, and with only 45,000km on the clock, it was a wonderful car that even I, a lover of classic Mercedes, was greatly moved by….

As you can see in the video, the owner is very careful not to damage the steering wheel and always wears soft gloves when driving this S350.

According to the owner, in addition to a fuel consumption rate that easily exceeds 10km/L on long drives, the Airmatic suspension and superb leather seats provide a tireless ride.

"You have to drive it to understand the charm of the S-Class..."

If that were the only way to describe the Mercedes-Benz S-Class, which even has a divine image as the most luxurious passenger car….

How should we accept and express the fact that this highest product value can be ridden for less than 1/10th of the price in just one turn of the times…!

The only way to know is to buy and drive the S class of only two generations ago, where you can experience a deep value proportional to the square of the price, more than 10 times.

If you’re a newcomer, or even if you’re a Mercedes connoisseur, an S-Class in good condition is one you don’t want to miss. The appearance is exactly the same as the S500, and the daily use of the S350 with the proven V6 is just superb…! This is the best time to drive a 2 generation old S class that has lost its fat…!

The S class is a product with 100 times the value of the product, and I truly felt that the life of those who drive it will be vividly colored ・・・・.

Please come to Gunma Prefecture, where there is no snow, to visit the supreme “S Class”…!

Please note that you will be required to pay the monthly car tax and recycling deposit when purchasing this vehicle.

The vehicles on this page are from “Estate Sale®︎ Supremacy”, the cross-border e-commerce site of Classic Car Collectible Car.

What is the “Supremacy” Estate Sale?

The content of this article was written during a three-hour interview from 9:00 a.m. on February 2, 2022, based on an interview with the owner, materials received, and a test drive in the passenger seat.

Please be aware that due to the limited time available, the information may not be 100% accurate.