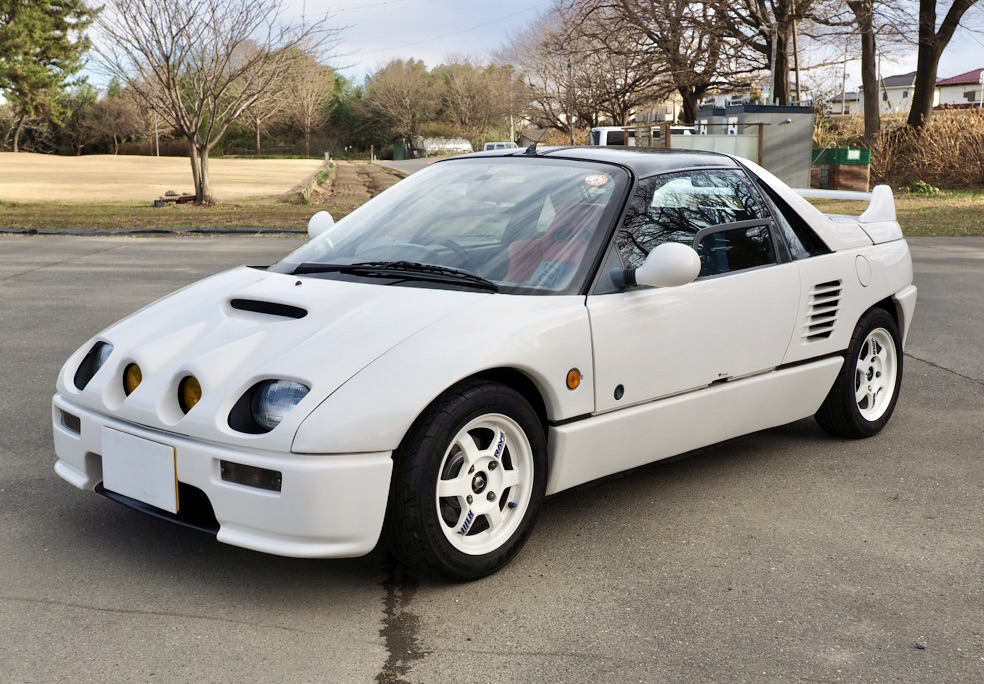 The height of the car is lowered by Desert Eagle’s ride height adjustable maximum suspension, which is wider and lower than the normal height. VOLK-RAYS TE37 13-inchers and ADVAN Neova fit perfectly on the visually widened body with Ritmo’s wide fenders front and rear. This “slightly” unusual AZ-1 has a fierce face like the Group B machine given to the M2, and stands before my eyes with an aggressive and attractive appearance.

In 2016, the ban on exporting the AZ-1 to North America for 25 years was lifted, and the presence of the “A” in the ABC trio became even more special in the American market, where there was no category for Japan’s Galapagos “mini-car”….

Today, the “funky and crazy Super Kei AZ-1” that has been driving American JDM enthusiasts crazy has no image of an unpopular car when it was first released.

The FRP body could be separated from the skeletal monocoque chassis if it wanted to, and the body was so special that it could be driven without the body. It outputs 64hp, which is just under the light vehicle output regulation…. That’s almost 100hp per liter…! When the turbocharging starts, it’s hard to keep up with the rising rev counter…. In addition to that, the 2.2 RPM lock-to-lock…changing direction with just one fist. The handling, which has been called “ultimate”, is ultra-quick…! How can this not be fun? This is the Super Kei that will give you that special feeling that every enthusiast gets when they are faced with a special vehicle.

If this is exactly the project number “1015” produced by M2, the second Mazda, a company with a unique approach to manufacturing on the eve of the collapse of the bubble economy…. Even the JDM enthusiast Americans would be very excited….

Mysterious numbers, like urban legends, have been circulating on the Internet among enthusiasts, highlighting the tragic story of the car’s initial release, and even adding to its value today, just like the famous painter who became overwhelmingly popular after his death.

In October 1992, Autozam started selling the AZ-1, but it was discontinued just two years later in 1994. While its rivals, the Suzuki Cappuccino and Honda Beat, were launched before the collapse of the bubble economy and won the hearts of young people, the ill-fated AZ-1 was launched just before the recession began in earnest. Naturally, sales of the AZ-1 fell far short of the target, and Mazda immediately decided to discontinue production…. By this time, only 4392 units of the AZ-1 had been produced, and only a very small number of the OEM Suzuki Cara, 531 units, were discontinued.

In an attempt to respond to this corporate theme with diversity, Mazda launched a number of “special edition” models….

The M2, the second Mazda that supported Mazda’s creative marketing at the time, was redesigned as the M2-1015 in three colors (Brilliant Black, Shance White, and Silverstone Metallic) from the stockyard stock that had all been painted red. The AZ-1, which had a cute image thanks to its round-eyed headlights, was transformed into a fierce face like the Group B machines of a while ago by adopting a special hood hood with a glaring look, and by keeping the front fog lamps inside the hood. The large front bumper, which could be called an air dam, the rear wing, the M2-1015 emblem, the aluminum wheels, the blacked-out rear end panel, the door mirrors, the side sills, and the rear bumper are all painted in the same color as the body. In addition, the door mirrors, side sills, and rear bumper were painted in the same color as the body, giving it a completely different look from the original and Mazdaspeed versions.

This transformed look and the agile performance of the original AZ-1 sports car blended perfectly to create the image of the little supercar that is now admired the world over….

In 1994, M2 started production of the 1015 with a limited order of 50 units, but for unknown reasons, the order was changed to 220 units…. There is a record that the remaining parts were sold as individual items to make up for the loss, and there are many “non-authentic AZ-1s” on the market with only the exterior parts changed, and it is commonly whispered overseas that “M2 planned to produce 50 units, but actually only sold about 25 units. In fact, only about 25 were sold.

The owner said, “It’s a lot of fun, so go ahead and ride it for a while…! He handed me the keys, and I opened the gull wing door of the M2-1015 AZ-1, whose front mask reminded me of a Gr-B machine. The dampers work well, and when you lift it up slightly, it transforms into a bird lifting its wings.

The one-of-a-kind appeal of this machine lies in the fact that the M2-1015 has been modified into an even more attractive little Super Kei with valuable parts, and all of the original and stock parts are included with the full Hiace cargo bed. (See the photos and the list of accessories at the end of the book…)

In addition to the included parts, there have been periodic modifications…

The most recent repairs and replacements include…

4 door dampers replaced on both sides

All water hoses replaced from front to rear.

The starter has been replaced.

Fuel pump has been replaced.

The front fenders have been replaced with Ritmo wide fenders and the rear fenders have been widened. The VOLK-RAYS TE37 13-inch wheels with Advan Neova are mounted with Desert Eagle dampers and springs to create a perfect image of the car, giving no stress to the discerning.

And what’s more, what expresses the personality of this vehicle along with its looks is the one-off original variable valve muffler made by Taiyo Motors….

It’s not like it’s a mini-car, but it has a mild mid-range boosted large sound and a near normal sound that can be controlled by the valve open/close controller next to the bucket seat, and this is something that the previous owner came up with.

The way to get into the car is exactly the same as in the Super 7 or Lotus Europa, put your left foot in first, then your waist.

Mazdaspeed bucket seats with reclining mechanism and Abarth steering wheel. And Sparco shift knob and boost gauge…. This is what I wish…!

Please prepare a separate Hiace for pickup...! It comes with an impressive amount of spare parts and normal parts...! You can enjoy it as a living thing..."

While this car comes with the record books from the first owner, it also comes with a full Hiace of valuable out-of-print parts that have been collected by previous owners. It has the capacity to be enjoyed as a living thing…!

Many other small parts…

M21015 – Nimble and agile in the corners… The unassisted steering conveys the texture of the road to the driver… It doesn’t look fast, but it’s a lot of fun to drive…! It’s a car that you can enjoy to the fullest within the speed limit… It’s a car that feels faster than its specs when driven in a low position!

Please take a look at the joyride video as well…!

This is an afterword, so I’m going to be a bit more personal and subjective…

I came back with a chain reaction of scales … my brain was on the verge of erupting!

And then I came back…. At the owner’s place, I opened the gull wing door and said…

I couldn’t help but say….

In America, where high power and muscle are preferred above all else as a symbol of strength, the AZ-1 is described as a “funky and crazy super Kei”…

The gullwing doors are not just for show. You’ll really understand it when you drive it…! After the 25-year rule was lifted, the rare and authentic M2-1015 was transformed into the JDM Super K that has enthusiasts around the world nodding in agreement…”

The title just came to me… It was such a precious report of my experience….

Please come to Gunma without snow to see the “scales from my eyes”.

Please pay the monthly car tax and recycling deposit when you purchase this vehicle.

The vehicles on this page are from “Estate Sale®︎ Supremacy”, the cross-border e-commerce site of Classic Car Collectible Car.

What is the “Supremacy” Estate Sale?

The content of this article was written based on interviews with the owner, materials received, and test drives during a four-hour interview that began at 1:00 a.m. on January 2, 2021.

Please note that due to the limited time available, the information may not be 100% accurate.