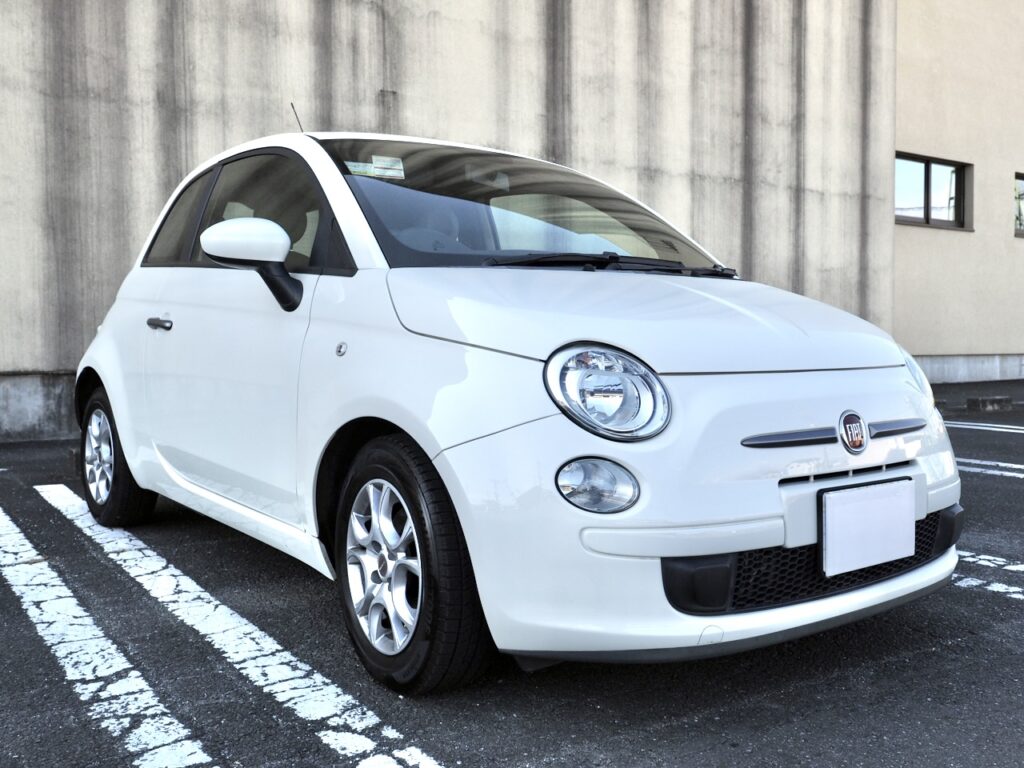 On the top slide you will find 50 attractive photos of the vehicle. Click on a photo to view it with its description.

Fiat, the company that gave birth to the first Cinquecento, has created a masterpiece...! The Fiat 500, equipped with the latest eco-friendly two-cylinder Twin Air engine, is a must for enthusiasts who want to revive the dynamic heartbeat of the first generation and experience the excitement of the engine in a 21st century masterpiece..."

The Fiat 500 Sport with TwinAir has a unique engine sound and heartbeat. You can see many hints that have been loved by men and women of all ages and from all over the world, including Italy, for more than half a century…!

The background of the first Fiat 500 Nuova was the 1960s, when Italy was recovering from the scars of its defeat in World War II and was entering an era of prosperity as the people’s efforts bore fruit from postwar reconstruction after the material devastation of the war….

A time of great vitality had arrived, with the revived ideals of democracy and the assertion of new values by a vibrant populace….

The Italian people, all of whom dreamed of the future and looked forward to development, were passionate about industry, the arts, and entertainment, blending the old with the new with a unique sensibility, and showing the world the persistence and creative genius of the Italian people….

Against this backdrop, in addition to inexpensive housing, there was a need for an affordable, low-priced automobile that could be used around town, and targeting the youth who could not afford even the Fiat 600 Toppolino, the least expensive car of the time, the Fiat 500 (Cinquecento) Nuova was launched on July 4, 1957! ushering in an era when the streets of Rome were flooded with microcars…! The first generation Fiat 500 was a symbol of the dynamic postwar revival of Italy, an era that dreamed of the future…!

At idle, you feel a distinctive heartbeat, and the tiny two-cylinder engine, floated by springs, says, “Turn it up!” It is as if to say…. When you get up to speed, the throbbing disappears and the car runs smoothly and freely through the city….

With its modern and bright design, inexpensive and simple construction, and sturdy durability, the “first generation Fiat 500” could comfortably carry two passengers and a small amount of luggage, or even take the whole family on a trip if the desire arose.

Fifty years after this drama in automotive history…

The Fiat 500, “one of the cutest cars ever made,” returns in 2007 with a new dimension and a refined four-cylinder engine on the same birthday as the original….

Two more years after its launch, enthusiasts around the world have been waiting for the “return of the Cinquecento of yesteryear…!” The “unique pulse created by the two-cylinder engine” has descended upon the enthusiast’s eyes as a car that will once again excite the hot Latin blood with its “twin-air engine”.

The same charm and sensuality as the first generation...! In fact, it is an amazingly developed internal combustion engine... The in-line two-cylinder "Twin Air Engine" is a lot of fun to drive! A revolutionary engine that resonates with people ...!"

The “2012 Fiat 500 Sport” introduced today is equipped with an engine that is said to be the “most successful downsizing in the world”…. The small displacement of only 875cc is supplemented by a turbo, achieving both low fuel consumption and increased power in a two-cylinder engine…! This is an unexpected achievement for Fiat, which has been involved in the production of 2-cylinder Cinquecento for more than 50 years…!

The Twin Aire fits into a small, lightweight chassis, and the engine itself weighs 85 kg…! It can’t be fun…! The two-cylinder engine, which combines driving pleasure and low fuel consumption, is a magic attraction, with fuel consumption of 23 km/L, equivalent to that of a hybrid vehicle, and a 30% reduction in CO2 emissions….

It is truly the return of the Cinquecento of yesteryear, taking the “two-cylinder engine” taste of yesteryear and sublimating it to a level appropriate for the 21st century…!

Turn the starter and after a few cranks, the unique twin-air immediately awakens with a refined “thump, thump, thump” sound… Contrary to the fact that recent cars, including EVs, have become quieter and smoother than ever, this is not a car for the faint of heart. The Fiat 500 plays a beat that makes car lovers go crazy…. It’s like the “groove” in a band sound…it’s not a car if it doesn’t have this beat…! It is a time of great happiness for car enthusiasts who love the beat of the engine and a great preview of what’s to come…!

The first generation car had 16.5 horsepower from a 490 cc engine, but what excited the Italian youth of the time was not such specs, but the greatest appeal of this car… “its balance with the weight of the car”!

The most delightful thing is that this “good balance” has been beautifully carried over to the Twin Air-equipped New Type…! The TwinAir turbocharger produces 85 horsepower from 875 cc, but because the boost pressure starts at a low level, it accelerates strongly right from the start and pulls the small, lightweight body with the dynamic pickup and punch that only a two-cylinder can provide…!

This is… “It’s not the specs! Fun in the flesh with sensibility…! It’s this balance that I take as…!” As if to say…. When the small body size is well balanced with the Latin suspension performance….

Sound and vibration” was an important factor in shaking people’s hearts….

This must be an element that is naturally demanded by the human instinct of “the joy of running on the earth”….

The sensual taste that resonates in the right brain is the most important element for enthusiasts, and they know it.

The return of the Fiat of yesteryear…….that is the image that comes to mind when driving the 2012 Fiat 500 TwinAir Sport, and it is a joy to be reminded of those good times…. The “thump, thump, thump” heartbeat is “irresistible” to the enthusiasts of the past, and it gives the feeling of “a living thing with a heart called an engine” that the cars of today have long since lost. It is one of the few cars with a very rare charm that you can taste…!

Limited to 400 units in Japan...! The cute image of the Fiat 500 has been transformed into a version for hard-core men...! Twin Air engine rave owners and the Fiat 500 Twin Air Sport Limited Edition"

A few years ago, the owner, who is a fan of German cars such as Porsche and Mercedes-Benz, wanted to try this twin-air engine that was highly acclaimed in Europe. He chose a Fiat 500 “Sport” Limited Edition with blacked-out wheels, roof spoiler, and black interior.

The four-cylinder Abarth was a bit too vigorous, and the choice of a two-cylinder car with a fun homage to the Cinquecento of yesteryear was a no-brainer.

The more he learned about the TwinAir, the more he fell in love with it, and even purchased a Chrysler Ypsilon equipped with the same TwinAir….

He has incorporated the two TwinAirs into his lifestyle and says, “This engine is very good! The owner of the company was highly praised at the beginning of the interview. We are pleased to be able to report on the owner’s decision to let go of the car due to a change in lifestyle.

Among the modern Fiat 500 with TwinAir, which has a feminine and cute image, this “Sport Limited Edition” is a little different and gives off a hard-edged atmosphere…! We hope that men will not hesitate to step on the gas pedal in manual mode and enjoy revving up to 5,000 rpm…. He hopes that they will enjoy it….

The current problem is that the molding around the cover at the base of the left A-pillar is damaged, but this can be purchased for about 7,000 yen….

Also, it is currently wearing studless tires with wheels, but will be delivered with the blacked out Sport Limited Edition wheels shown in the photos.

There are no cracks in the airbag seal above the crash pad, which is common in this new type Fiat, and the car is in really good condition to drive without hesitation….

We hope you will enjoy the return of the Cinquecento of yesteryear by incorporating this slightly hardcore Fiat 500 TwinAir into your lifestyle…….

The survival of a car with an attractive engine and the conflicting environmental measures are something that every enthusiast must ponder…. The next Fiat 500 will be an EV….

That’s why… now is the time to get in!

The Fiat 500 with the latest eco-friendly two-cylinder TwinAir engine is a must for enthusiasts who want to experience the excitement of the engine in a sensory experience that brings back to life the dynamic heartbeat of the first generation. The greatest car of the century…! I was deeply moved by this report.

The return of the Cinquecento of yesteryear, created by Italians with their stylish sense of style….

The new Fiat 500 will surely change the daily lives of its new owners in a dynamic way….

Please come to Gunma to feel the dynamic heartbeat and dynamism of the new Fiat 500.

No sales tax or fees will be charged as this is a private sale.

Please note that you will be required to pay the monthly automobile tax and recycling deposit upon purchase.

The vehicles on this page were listed on the Classic Car Collectibles Ka’s cross-border e-commerce site, Estate Sale®︎Supremacy.

This article was written based on an interview with the owner, materials received, and a test drive experience during a 3-hour interview starting at 9:00 a.m. on February 2, 2021.

Please be aware that this may not be a 100% accurate description of the condition of the vehicle due to the limited time available.

The content of the original manuscripts is based on careful research both in Japan and overseas, but we do not have all of the information backed up by on-site visits or other means. Please note that comments on the condition of the car are based on the weather and conditions at the time of the interview, as well as the author’s own subjective opinion.