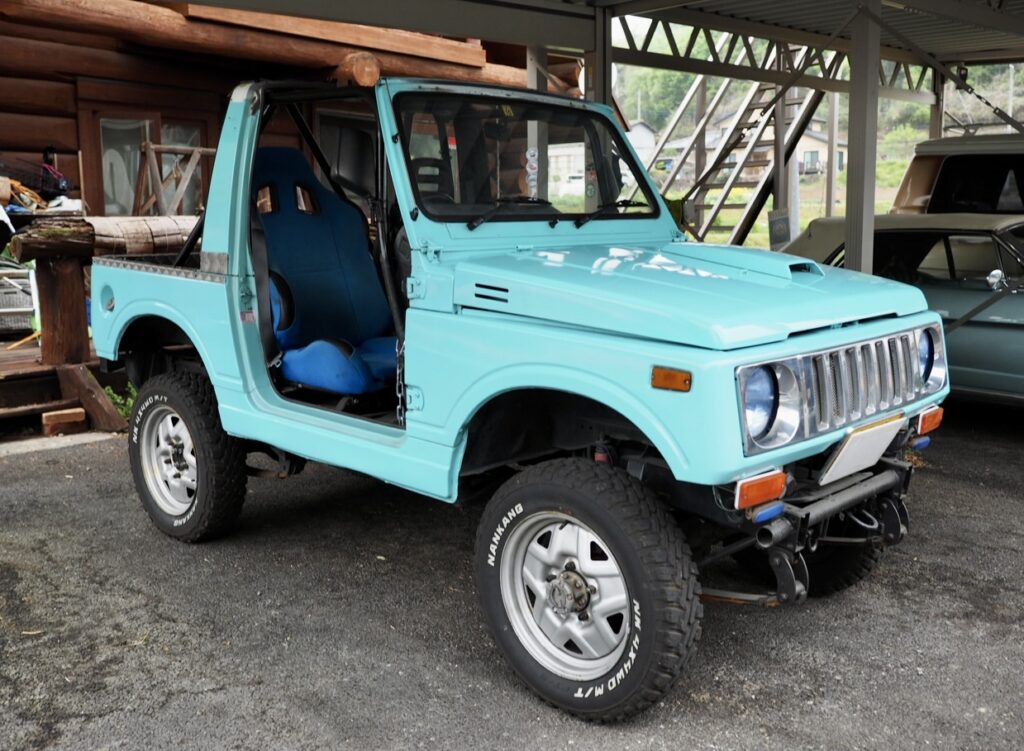 On the top slide you will find 50 attractive photos of the vehicle! Please click on a photo to view it with its description. Click outside the picture to return to the page.

If you simply want to enjoy your car, there is nothing better than this...! A "man's 4WD" filled with the joy of running freely across the land...! The second generation JA11, the third generation of the Jimny, is said to be the perfection of the Jimny. A FUN vehicle that every enthusiast should have by their side...!

Suddenly … have you ever driven a JA11 Jimny …?

The structure is so simple that it cannot be compared with high-spec on-road cars…. In today’s era of monocoque suspension technology, a rigid axle suspension using a “plate spring” as a fixed axle is mounted on a ladder frame…. The short wheelbase of 800 kg with a wheelbase of only 2,030 mm and large-diameter tires…The extremely tough 657 cc long-stroke engine, which is tenacious even at low speeds, boasts amazing performance over rough roads, and even today, two model changes ahead of its predecessor, many enthusiasts would dare to switch to this older model for cross-country driving. Even today, when the model has undergone a two-generation model change, there are many enthusiasts who would dare to switch to the older JA11 Jimny if they wanted to use it as a cross-country vehicle.

The JB23 model was one of the later models that underwent a model change in conjunction with the revision of the light vehicle standards and the increase in size…. The current JB64 model, which was recently introduced to meet the market trend of “cross country vehicles for town use,” was also remodeled after the anti-skid function became legally obligatory. However, if we put the point on the original purpose of this vehicle, “the ability to drive on rough roads and bring the driver back no matter where he or she goes,” this JA11 Jimny is called the “perfect form of lightweight 4WD”….

The JA11 model uses far fewer electronic devices, leaving most driving-related operations to the driver’s hands and feet, and like the Jeeps of old, the 4WD transfer switching is “mechanical,” and even switching to free the wheel hubs requires the manual turning of a dial. Even the switch to free the wheel hubs requires manual turning of a dial. This analog feel, which is done by hand and does not rely on machines, gives the driver a great sense of security, and its menacing physical capabilities, with its greatest weapon being its simplicity and light weight, demonstrate the ultimate in climbing performance in the face of bloated later models…! This unique and rare existence has captured the hearts of gymnasts all over the world… It is truly the ultimate analog lightweight 4WD….

The "fun of driving by yourself" that you can't experience with modern cars is fun without any logic...! Enjoying a simple car... The solitary analog existence is JA11...

Jimny is the only “lightweight 4WD” in the world. The ladder frame is designed for strength and durability, and is powered by a single-cam, long-stroke F6A 657 cc liquid-cooled 4-stroke inline 3-cylinder SOHC IC turbo engine that is tough and tenacious at low speeds and easy to handle. It is light enough to conquer steep, rocky terrain and nearly 45-degree slopes, a physical capability that is not possible even with ordinary 4WD….

In addition to this high physical ability, the reliability, low running cost, low purchase price, easy availability of parts, high possibility of modification, and the fact that it is a solitary analog among “usable models” have made it a popular vehicle not only for cross-country, dirt trial, and guerrilla trial, but also for “cross country,” “dirt trial,” “guerrilla trial,” “road trial,” “road racing,” and “road racing” in many parts of Japan. JA11 has become a common choice for “forest road enthusiasts” who drive on “roads not shown on maps” in various parts of Japan. Today, 50 years after the Jimny’s birth, this one-of-a-kind vehicle has developed a worldwide fan base, and vehicles that have passed the 25-year rule are actively sought after by overseas buyers.

Can I go there? Even if I go, will I be able to return home? No, I can go…!” The Jimny JA11 is the 4WD for true survivalists. It is a 4WD that offers the best performance at the lowest running cost, and many female enthusiasts are now challenging themselves.

Although the doors were removed for inspection, they were removed gracefully and the rear section of the van cut………………………….. The roll bar installed at a point where it seems to be rigid and the body lifted a few inches…. The unique plated front grille and engine hood lifted to release heat… The mid-range sound from the external muffler and the wild appearance really struck a man’s heart… The car is a JA11C (holo vehicle) and is ready to take on the “forest roads not found on maps” as is. It is a Jimny that makes you want to challenge “forest roads that are not on the map” with its JA11C (holo vehicle) form.

The owner who used to drive a Jimny for daily use gave it up once, but he could not forget the “fun” that is unique to Jimny…. He bought this car a few years ago.

When he saw a Jimny with almost the same specifications in a local auto shop, he said, “This is it…! He bought it immediately without any trouble. He took off the door immediately after he got it, and he has been actively enjoying “life with Jimny” as an everyday vehicle including commuting on sunny days….

Here in Gunma Prefecture, at the northernmost tip of the Kanto Plain, surrounded by the three Jomo Mountains, there are many “forest roads not shown on maps” that are famous throughout the country, and it is a famous place for Jimny enthusiasts to gather from all over the country, but the owner says that he mainly uses it for everyday use, which is confirmed in the video. 〜As you can see in the video, the underside of the vehicle is very clean and rust free, and there is only some rust floating under the rear end where the water is drained from the cargo area and some cracks on the left side of the vehicle.

As you can see in the driving movie, the car is in great condition after the timing belt replacement. The engine starts well, and the car can be driven in the open air with no problems at all.

The radio does not work……..

The feeling of being in control of the car is amazing, and I can always flash back to the first time I rode a go-cart in an amusement park…. This feeling can never be experienced with modern cars controlled by electronic devices…! The owner has been enjoying “the life with Jimny”, but this time, he decided to reduce the number of cars in his garage, which had increased too much.

This is a wild car that is perfect for enthusiasts who are not satisfied with ordinary cars. If you are interested in this car, you can fix it by DIY, and if you have the skill, you can challenge the “forest road not on the map” right away.

We hope you will enjoy “Life with Jimny” with this precious JA11C full of open-air feeling….

The mid-range sound was stimulating…and I was very impressed with the way it responded to the gas pedal and drove briskly…I have long experienced the Super 7 as a model without even doors.

I have long experienced the Super 7 as the same open-air model without doors, and while there are fundamental differences between on-road and off-road driving and the height of the eye point, the “joy of freely running through the earth” with the light weight is exactly the same. However, the “joy of running freely through the earth” with the use of light weights is exactly the same.

What fun it would be to be able to easily enjoy that wonderful feeling and run through steep rocky terrain without worrying about the bumps at the convenience store, which I used to worry so much about with the Seven…! After the interview, I found myself watching several videos of driving in Mizorogi, Gunma Prefecture, a mecca for driving on forest roads, and once again confirmed the appeal of the JA11 Jimny….

In these days when the world is moving toward various safety devices such as automatic braking systems and electric vehicles, the JA11 Jimny may be the last masterpiece as a vehicle equipped with an internal-combustion engine that can be freely operated by human beings.

I could not help but feel the great value and attraction of this “best tool” that will never be made again….

If you simply want to enjoy your car, there is nothing better than this…! A “man’s 4WD” filled with the joy of running freely across the land…! The second generation JA11, the third generation of the Jimny, is a fun car that enthusiasts must have by their side…!

Please come to Gunma Prefecture to see the wild and fast driving experience….

[Upon making an inquiry…

What is the Supreme and Best (Supremacy) Estate Sale…?

Estate Sale®︎Spremacy is the Japanese version of the North American cultural estate sale, which introduces cars that are full of the owner’s thoughts and feelings through manuscript preparation based on interviews, and organizes goods and minds.

Unlike a two-for-one or low-priced purchase that leaves nothing behind, we guide and broker owners to honestly express their feelings and ensure that their memories are passed on to the next generation while leaving their hearts firmly intact.

This article was written based on an interview with the owner, materials received, and a test drive experience during a 3-hour interview starting at 3:00 p.m. on April 26, 2022.

The content of the original manuscripts is based on careful research in Japan and overseas, but is not backed up by any on-site inspection or other verification. Please be aware that comments on the condition of the vehicles are based on the weather and conditions at the time of the interview, as well as the author’s own subjective opinion.